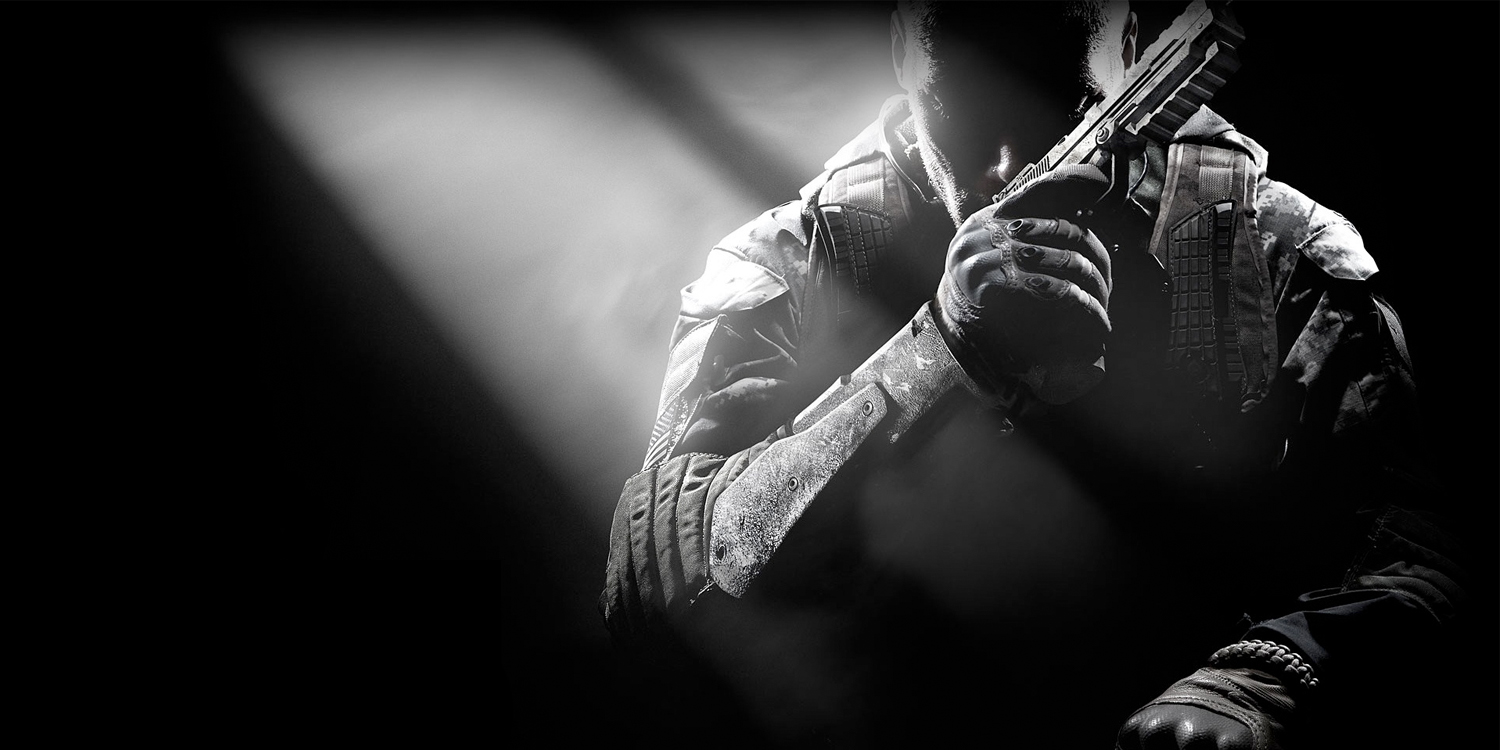 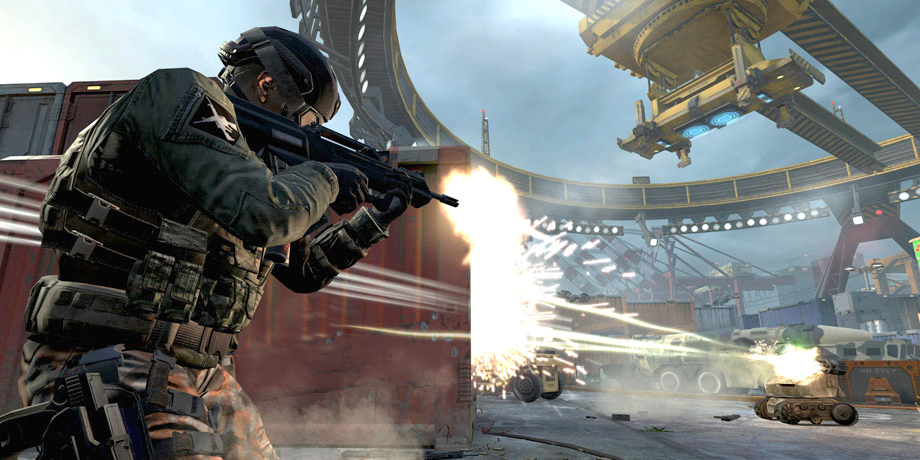 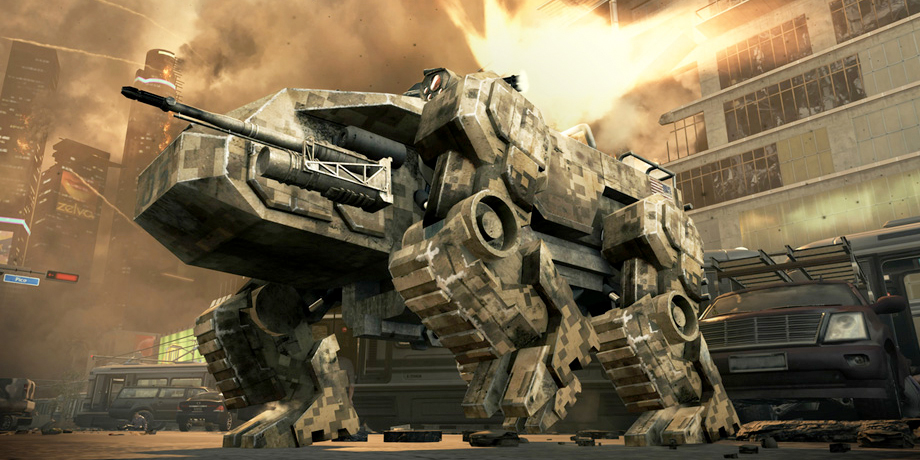 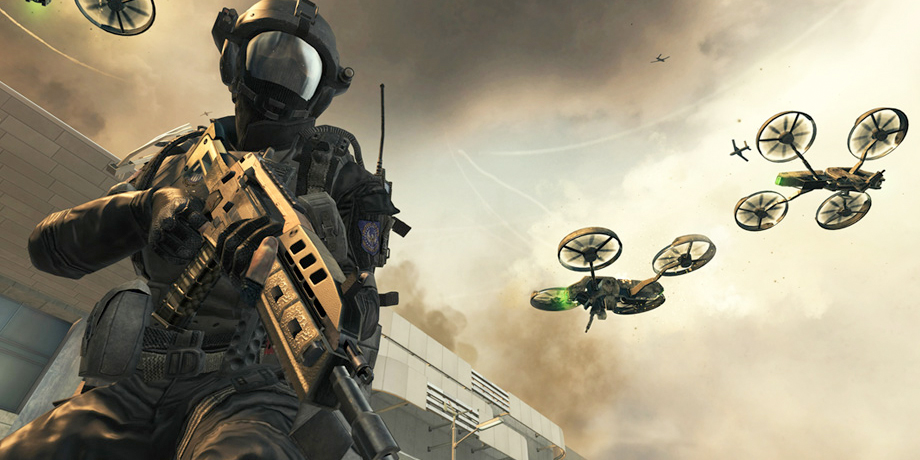 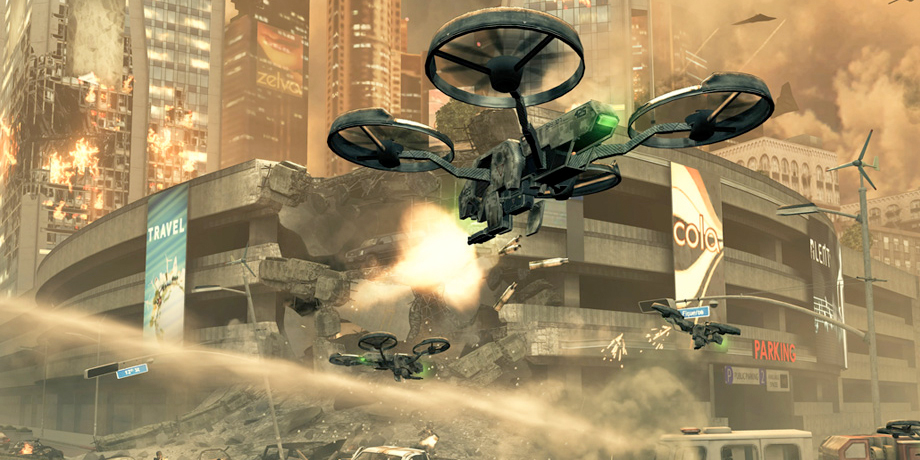 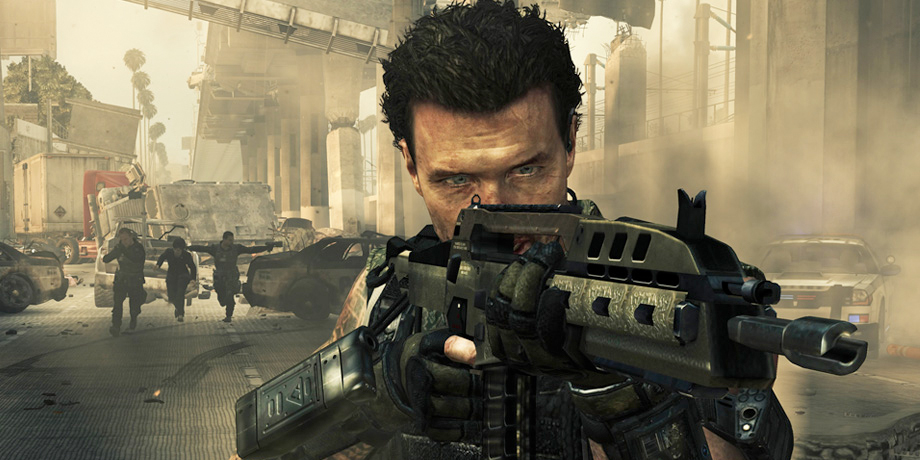 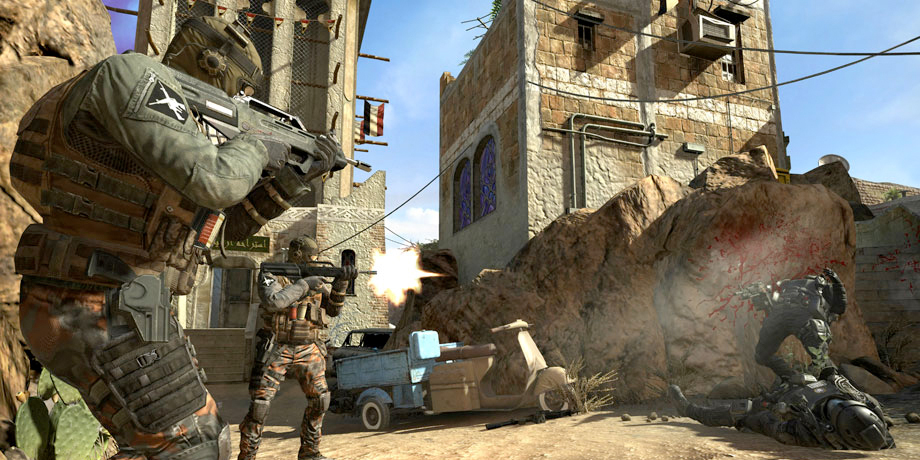 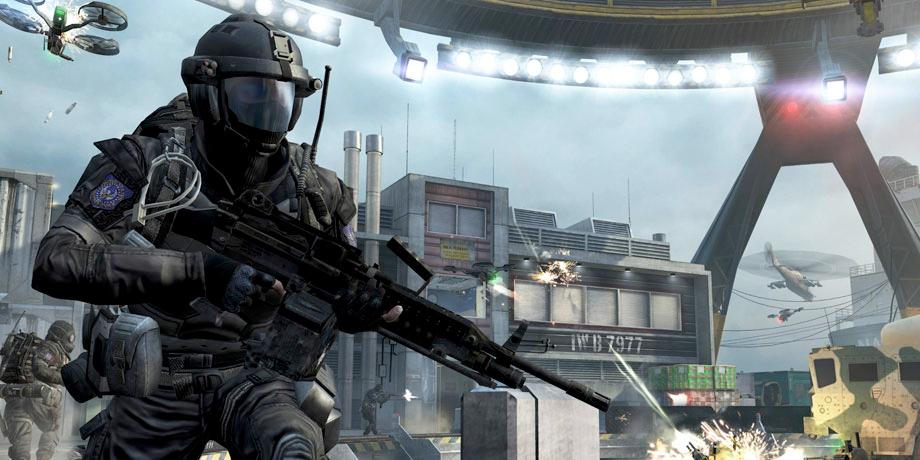 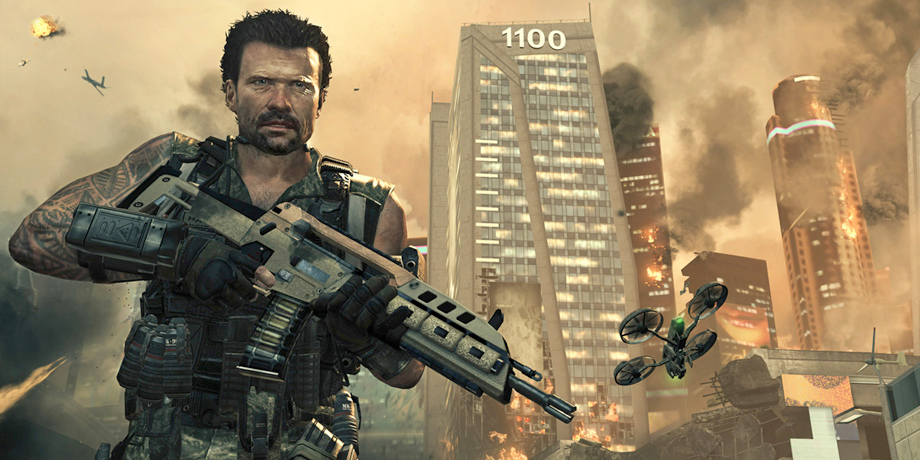 If the saying ‘it’s best to stick to what you know’ has any truth to it then the Call Of Duty franchise must be joined at the hip to a large pile of money; and the latest installment is no exception.

Call Of Duty: Black Ops 2 is the sequel to the original Black Ops, Treyarch’s 2010 addition to the series and arguably the best game in the franchise behind the iconic Call Of Duty 4. Although Treyarch’s continuing trend of innovation and new ideas are no doubt taking CoD in the right direction, there are still a few creases that need to be ironed out before Call Of Duty can once again deserve the title of ‘Game Of The Year’.

The Black Ops 2 campaign is easily what it will be remembered for within the context of the series. Beautifully written by David S. Goyer (The Dark Knight trilogy) and scored by Trent Reznor (Nine Inch Nails/The Social Network), they have crafted an absolutely sublime single player experience. The campaign jumps between events shortly after those of the original Black Ops, which in turn provide context for the remaining story missions, set in 2025 following Alex Mason’s son, David. In a nutshell it sounds as generic as the plot of a… well, Call Of Duty game but wait – A wild moral choice system appears!

Your actions and decisions within the campaign affect the character’s relationships with one another, who will live or die, and ultimately how the campaign will end. The great thing about this addition to the campaign is that its subtle, as opposed to a game like Fable, where decisions and their respective outcomes are made about as obvious as the eating habits of a vegan; the ‘choices’ you make within the campaign are so expertly woven into the story that some I didn’t even realise I was making them. (With the exception of the poorly utilised ‘Strike Force’ missions, I made a very concious ‘choice’ to avoid them at all costs.) Personally I found this direction to be a refreshing change from the standard Call Of Duty set-up of dragging the player from one set piece to another; not only did I feel more connected to the characters I was playing and interacting with, but it also adds a level of replay value that the previous games didn’t have.

As I’m still waiting for the large bag of money Activision sends all reviewers in exchange for the writer’s soul and a good score, there are still some negative points to raise about Black Ops 2. First and foremost, the game engine – I mean what the fuck, Activision? You people have more money than the Catholic church, and considering both you and the church focus on the entertainment of young boys, the least you can do is update the game engine that’s been used since CoD 4. Call Of Duty is the most successful media franchise in human history, it should look like one. Guns stick through walls, enemies jump through windows without breaking the glass and the AI on both sides are pants-on-head retarded. For a game being released in the same year as technological marvels like Assassin’s Creed 3, Max Payne 3, Halo 4 and Hitman: Absolution, Call Of Duty can’t expect to run an action game on a four year old engine without being pulled up on it.

In addition to the strong campaign, Black Ops 2 also offers game modes where you fight off wave upon wave of mindless, brain dead enemies aka the multi-player. Again, Treyarch have shown their innovative side with a slew of changes to Call Of Duty’s legendary online play, but like a blind man in a fight their efforts are hit and miss. Two of the most notable changes made in Black Ops 2 are the 10 point create-a-class system and score streaks – features which in theory both balance and personalize the multi-player experience. The create-a-class system essentially makes every perk, weapon and attachment worth one point, then gives you a total of 10 points per class slot to customise each class to your liking. Variations can be anything from six perks and nothing but a knife to having two primary weapons with more attachments than a Christmas tree but nothing but your skill as a special ability.

Score streaks on the other hand are a redesign of kill streaks, but instead of accruing kills to gain your rewards, points from assists, objective play and, of course, the blood of your enemies all add towards your rewards. Both fantastic ideas in their own right but the small map design and ridiculous spawning system in Black Ops 2 only serve to limit the freedom that the innovations offer. Black Ops 2‘s multi-player has one saving grace though. The Call Of Duty World League is the most beautiful thing that could ever be added to a Call Of Duty game. It features ranked matches in a mosh-pit style playlist that divides players by skill level. The only way to stay in your division is to win, a lot. If you want to play a tactical, competitive, challenging game of Call Of Duty multi-player with people old enough to understand the meaning of the word ‘objective’ then check out the CoD World League, this is where the fun is to be had in the Black Ops 2 multi-player.

Lastly, zombies. What was once a tacked-on mini-game featured in Call Of Duty: World At War has now become an aspect as important to Trearch’s Call Of Duty games as the campaign and multi-player are. I never really enjoyed zombies in the Call Of Duty games, I don’t understand why you’d buy an action shooter game to play zombies… when you can buy a zombie game to play zombies. Regardless, the game mode has been expanded from a singular building to an entire town, with players being able to move from location to location via bus to survive against the undead for as long as they can. The open world environment undoubtedly makes the experience more fun, and additions such as buildable equipment, like the turbine, make it almost fun enough to forget I could be playing a proper zombie game, but again the game engine definitely falls short. Just because you made the zombie’s eyes glow blue doesn’t mean I didn’t notice that I just fell through the floor of the fucking bus.

All in all Call Of Duty: Black Ops 2 is still worth getting. For the story alone it’s worth the buy; sure the multi-player might be a bit hit and miss but at the end of the day it’s CoD and you’ve probably got it already. I’ve always respected Treyarch for constantly trying to balance and reinvent the experience across all three of their game modes, but there’s only so much you can do with a game engine that’s almost pushing ‘broken’ status in some aspects. Put it this way, Call Of Duty is like a Nissan Skyline: It’s badass, it’s cool and almost everybody likes it, but just because it can still break the speed limit doesn’t mean it’s not becoming outdated; and when Halo 4 pulls up alongside it at the lights in a Lamborghini Aventador, Call Of Duty might want to consider it’s competition before it goes around honking it’s horn and telling everyone it can still beat them in a street race.

You may also want to have a peek at these reviews: Halo 4, Assassin’s Creed 3, Mass Effect 3.