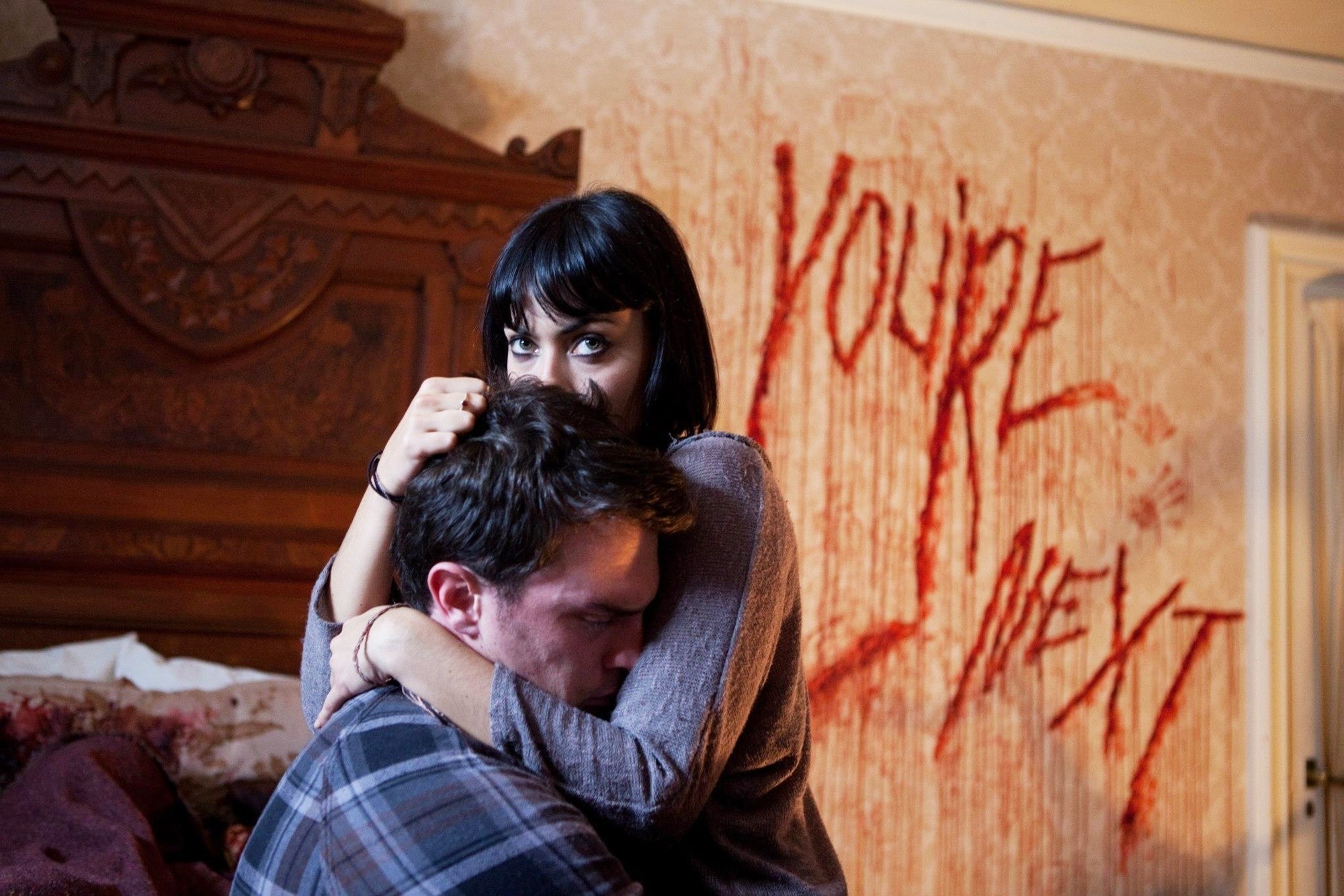 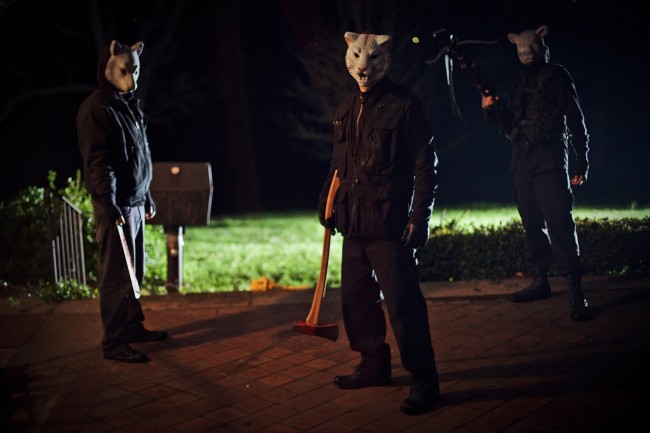 Horror film scenario: A room full of rich, not too likable white people who spend almost every breath bickering and complaining, notice something strange, something very odd about one of their house guests… Could it be the arrow that’s mysteriously appears pierced through his head? This marks the beginning of a night of brutality, deception, self-awareness and bloodshed of the highest order.

Erin (Sharni Vinson) and Crispian (A.J Bowen) have been together quite some time and it’s finally come to that weekend where he takes her to meet his family…in their large, secluded home in the country. In attendance is Crispian’s parents Aubrey (Barbra Crampton) and Paul (Rob Moran), his selfish and obnoxious brother Drake (Joe Swanberg), his sister, Aimee (Amy Seimetz) and several others. The night intended for meet and greets and a non-hostile family reunion, succumbs to a blood soaked massacre as this unpleasant yuppie family are attacked from assailants outside the house wearing animal masks, whom have more than a few weapons on their person. From here on in each family member must do everything in their power to stay alive and rely on whatever is in their home to protect themselves from these random murderers who want nothing more than to see each and every one of them dead in the most horrific of ways.

Unlikable has been used twice in this review already and in describing the family as opposed to the depraved murderers wearing animal masks, and for good reason. The film’s first twenty minutes are designed to have us understand that these are upper middle class twats whom will die slowly in the most demeaning of ways. So when axes are being flung into these people’s faces, we’re either invited to laugh or gasp in terror yet revel in the inventiveness of their demise. So why was the person whom has written this review not laughing nor hi-5′ing the screen when everyone was getting murdered?

One of these characters is forced to become the hero, the savior, Is it cool? For a second it is, it really is. Comeuppance in horror is almost always satisfying, but only for moment. In You’re Next we are subjected to endless nastiness at the hands of the filmmakers, director Adam Wingard and writer Simon Barrett. They take their time with each death, reveling in each victim’s screams and cries for help before their slow and painful death. It quickly stops being cool and/or funny. This reviewer is not prudish to violence either, but there needs to be a strong story paired with it. You’re Next is really is about very little, making the nastiness on screen purely for fun’s sake.

The treatment of women, which is pretty horrific at times, is another issue that arises with You’re Next. There’s an emphasis on the female characters being vulnerable thus making them targets for the film’s sadism. The hero is a non-sexualised woman who is the only female not utilised for vulnerability. Great! Damn shame about every other female character in the film. Women in horror are either sexy hero’s or brutalized victims, hardly an in between; it’s a great downfall for the genre as a whole. You’re Next is almost the exception with its choice of hero. Almost.

Still, there are some fantastic moments of built tension and character interaction in a handful of scenes which is thanks to Barrett and Wingard. As for performances, the real standout is Rob Moran, the father, (seen in just about every Farrelly Brother’s film ever made) is the most convincing of anyone on screen, elevating any silliness by his mere presence.

The score played throughout You’re Next continuously reminds us to have fun with the film, this reviewer however could not surrender to enjoying the brutality and nastiness before me. My inability to do so could be for reasons of a prudish nature, or it could also be that the sight of a woman’s head being hit with an axe as if the killer were partaking in a session of miniature golf isn’t something that merits laughter or a smile. Sorry.

You may also want to have a peek at these reviews: Elysium, Wale,  The Wolverine