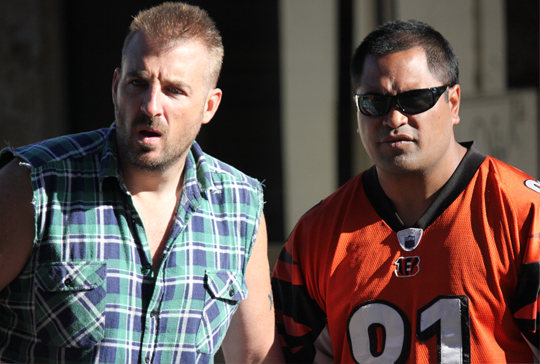 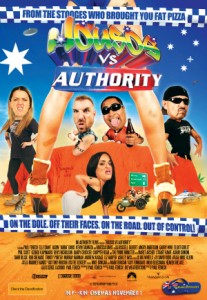 Based on the television series Housos, Housos VS. Authority follows three groups of people living in “Sunnyvale,” a derelict suburb in New South Wales. Here we are exposed to their constant run in’s with authority, poverty and the continuous struggle of love, loss and friendship in a time of economic hardship. A triumph of the human spirit….Now if you think that’s what Housos VS. Authority is/could be about, then close this page right now and go see Argo, jokes about farting, stealing and defacing public property ensue. Yet is any of it funny?

This is where a plot synopsis comes in, yet we aren’t talking about a film that associates itself with this thing we call a plot, but as it must be done: Shazza’s (Elle Dawe) mum has died and her dying wish is to have her ashes spread over Uluru so she decides to take the trip by bringing along her deadbeat husband, Dazza (Jason Davies) his best mate Frankie (Paul Fenech, the film’s writer, director, producer and just about every other crew member in the credits) his best mate Kevo (Kevin Taumata) and his loud, terrifying wife, Vanessa (Vanessa Davis). They proceed to road trip across the country where they destroy everything they touch and decide to make love in the most public and monumental of locations. It gets more and more ridiculous from the point onwards but if I continue, you’ll have to meet other characters whose names end in “azza”, you don’t want that, trust me.

So after reading that, tell me, why did I laugh a hell of a lot more than during Ted or The Campaign?

Before you say “because you’re an idiot” you have to consider, this is a “movie” that does everything in its power to offend you and make you laugh rather than pretending it cares for plot and three dimensional characters (something the comedies listed above did). Housos Vs. Authority has no shame, no understanding of structure or decency, it just does everything it can to top itself every five minutes in something more ridiculous and idiotic in hopes that you laugh, and after about five minutes, you become accustom to this and either do so or not, if not, get the hell out of there, if so, stick around, it gets better (or worse, if you really think about it).

Paul Fenech directs the film like one big episode of Housos yet the timing of each gag strangely works, there are no inventive camera angles or amazingly shot set pieces, it all comes from the exaggerated performances and timing and they work. If you’re wondering how the writing is, then you haven’t been reading this review carefully of haven’t seen the trailer for this film yet.

Did you find the show funny? If you haven’t seen the show, do you find poor Australian people throwing objects at police and politicians funny? If so, why haven’t you bought your ticket yet? It’s 107 minutes (yeah, really) of gags and stupidity and you will laugh yet hate yourself for it the minute after.

To say Housos Vs. Authority is a bad film is easy, to say it made you laugh at decent amount to people you respect, now that’s the hard part.

You may also want to have a peek at these reviews: Skyfall, The Man With The Iron Fists, Need For Speed: Most Wanted.