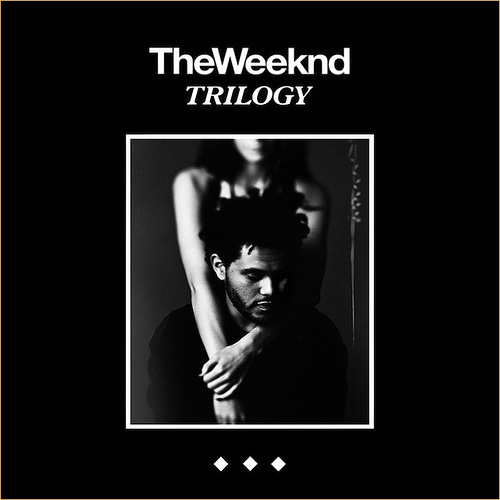 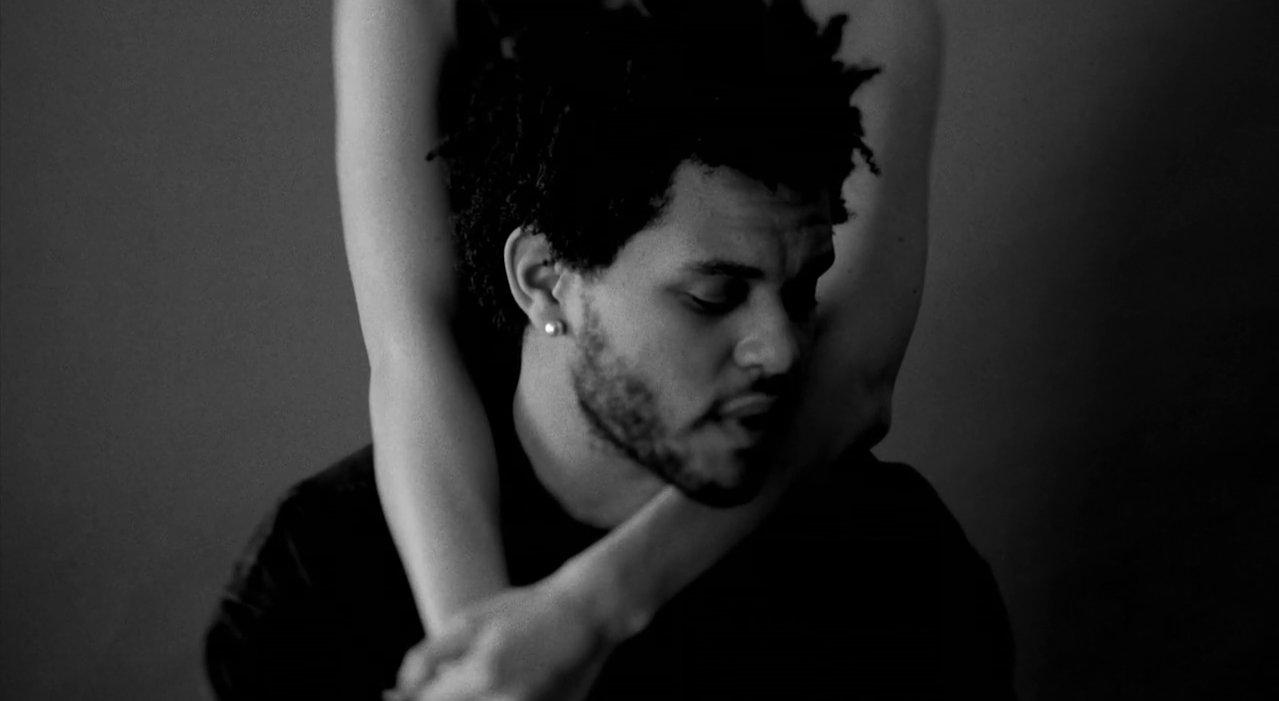 You know when you come across those artists who have just emerged from out of nowhere and blown you away with something so special you hope nobody else will come across because you’re blissfully selfish and want to preserve it for yourself out of a fear that if the general public gets their sticky, bubblegum-coated hands all over it, the artist will be doomed for all eternity, subjected to a lifetime of pleasing teenybopper masses and sheepish older folks trying to keep up with what’s hip (i.e. in tune with said teenybopper masses) as they change their radio frequency on the way to or from their dreaded 9-5 jobs in hopes of catching it so they can discuss the artist’s hipness with their teenybopper mass kids?

But one that many of us relate to nonetheless. And one that was very, very real to me when in early 2011 I stumbled upon The Weeknd, who had just put out his first mixtape/EP/free digital album House of Balloons, which I’ll admit I was first drawn to because of this cover art: 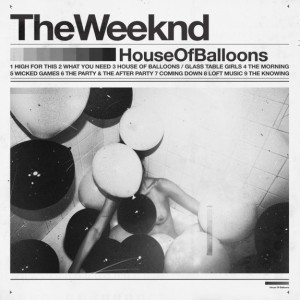 Of course, the first thought that ensued was “OH SNAP! A TITTY! THIS MUST BE TITTY MUSIC!” And then I thanked Microsoft for the seemingly never ending trial of WinRAR I have installed, because it granted me access to some scarred yet sensitive, seedy yet sophisticated, spurious yet sincere – and all the while seductive – R&B…you know, the kind of music which reminds you that you’re an adult with an adult life of sex, drugs and self-destruction, which you are not likely to experience listening to most FM frequencies that would rather purport you with youthful but ever-so-misguided love? Or having that one thing that some androgynous, pre-pubescent, walking Napoleon Perdis billboards claim that they need, despite the fact that they wouldn’t know what to do with if they were given said singular entity?

Yes, the album really was that good. No doubt, it was R&B with how incredibly smooth yet powerful The Weeknd’s falsetto-driven voice was laden over tracks which were the sweetest reinventions of the much-missed slow jam (What You Need, The Morning, Wicked Games, The Party & The After Party), but there was also controlled, distorted, grungy infusions of dubstep (High For This) and punk rock samples (House of Balloons/Glass Table Girls, which arguably has one of the most ominous movements – or in this case, hijacks – heard in music for the longest time).

Coupled with the subject matter of drug use, sexual deviance, and all other things good and plenty to the heartbroken lifestyles of the numb and shameless (okay, shameful as well), this was one of the most X-rated R&B projects to date; yet, the situations were explicit, rather than the acts, so you were more moved by the state of our adulterous protagonist bringing his shame, pain, drank and promises of fame to his female companion, as long as she brings her love, drugs, cups and body to him…all this instead of hearing about talents of fellatio and the stroking of penises and, subsequently, egos. Granted, there are moments of ego-stroking and obnoxiousness, but it is oh so very tame to what we all are accustomed to.

Hipster crowds jumped onto it faster than your run-of-the-mill R&B fans, and this could be attributed to the fact that there were samples from Siouxsie & the Banshees, Beach House and Cocteau Twins. And this set the premise for the next two projects, Thursday and Echoes of Silence, both released throughout 2011, which expanded on the exploits of this desperately wanting, self-destructive character…and each found a new way to do it.

Thursday kept the R&B elements at the core, but found itself more inclined towards dub (Life of the Party and Heaven or Las Vegas), and acoustic (Rolling Stone); but where it shone the brightest darkest was in a triple-threat of three consecutive masterpieces: The Zone, The Birds Pt.1 and Pt.2. The Zone is driven by drums mimicking a heartbeat (and yes, the bass pounds too), high piano keys, acoustic guitar, faded background vocals over ominous synthesizers, and a solid verse from Drake. The Birds Pt.1 is dominated by marching drums, and enjoys guitar distortion which only gets more intense throughout the song, which in itself is tragically empowering as The Weeknd croons the warning “Don’t make me make you fall in love…I’m just a bird, I’m just another bird…you’ll be falling to the point of no return”.

The sequel, sounding almost a remake of Nancy Sinatra’s Bang Bang with its slow bluesy guitar riff, is the result of what happened when (yep, you guessed it) she fell in love. Cause-and-effect is captured perfectly here, as the infatuated woman is desperately in love with our (anti-?)hero and drives herself to begging to let herself fall out of love before he moves on to the next woman…and the distorted vocal sample of Martina Topley-Bird’s Sandpaper Kisses is used guilefully here as the vocalisation of our hero’s (ambiguously conflicted) conscience; a beautiful mess, and arguably one of the most disturbingly powerful songs…ever.

Echoes of Silence made yet another significant change in sound whilst still being centred on R&B, and this time around…The Weeknd adopts a very evident take on the vocal stylings of Michael Jackson. Bold move? Indeed. Did it pay off? Let D.D. (the cover of Jackson’s hit Dirty Diana) convince you with the surprising amount of justice it does to the original: it’s grungier, its drums are more deafening, and fragility is added to the ferocity of The Weeknd’s falsetto (again, in the style of MJ); this also sets the tone for the album as one which, through its inclination to slow jams more so than the first, is arguably much more focused on sex. No, not love-making, that’s for prudes – I’m talking the art of f#ck.

Montreal continues the strong snares in a pseudo-80s fashion, as The Weeknd interweaves his singing an excerpt of 1964’s Laisse Tomber Les Filles…and what could be sexier than French shit? The song itself deals with a woman’s missed opportunity at taking advantage of our  hero out of the presumption that he plays hard-to-get, and is an example of simple yet engaging lyricism. The oriental feel to Outside is also deceptive, but rest assured, once it’s finished with you, you won’t want to go outside. Ending on the double-team of Next and Echoes of Silence, which prove to be the calm after the musical storm, the album proves itself to be, like its predecessors, pure aural sex.

Each of The Weeknd’s albums (produced exclusively by Doc McKinney and Illangelo) have been that rare breed that is simultaneously (and equally) intoxicating and sobering. Of course with so much acclaim and the fact that these three were available free of charge, his recent signing to Universal Republic has seen them removed from his website, and thus the death of the free download. But wait…his body of work has been remastered (which really amounts to minor tweaks here, some added bass and/or distortion there), compiled into a trilogy, and as a bonus, has had one song added to end of each album (Twenty Eight, Valerie, and Till Dawn (Here Comes the Sun), respectively). What you get, for such a worthwhile price of course, is over two-and-a-half hours of simply added value to best thing to happen to R&B since the last best thing to happen to R&B…which was so long ago, who the hell remembers?

You may also want to have a peek at these reviews: Kendrick Lamar, Miguel, Parklife.