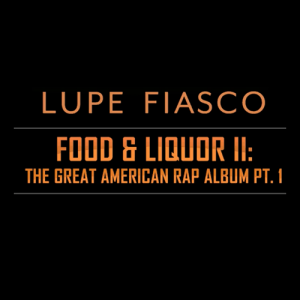 As much as people try to defend L.A.S.E.R.S., be it out of unconditional Lupe Fiasco fandom, a genuine liking towards the album, or simply out of acknowledgement that it could have been much worse, anybody claiming it was Lupe’s “best work” deserves a laryngectomy performed with the shards of their broken copy of the album…twice over if it is also the only Lupe album for which they forked over their money.

But I digress with my sadism, and even offer such fans an opportunity for penitence. Their task is simple – buy Food & Liquor II: the Great American Rap Album. Two reasons: firstly, the sour taste of L.A.S.E.R.S. must be filtered out; and secondly, more importantly, is that we are seeing Lupe returning to the form which made us fall in love with his thought-provoking music since the first Food & Liquor.

The first, most glaring difference to L.A.S.E.R.S. is that F&L2 does not have Lupe spoon-feeding its listener and stripping his content down to its bare bones. That’s not to say he is as cryptic or metaphorical as he was on The Cool, but the driving force of the man is that he can mask complex thought and multifaceted social commentary in an easily-listenable track and reward his more analytical fans by making each song a puzzle to solve. Consider Around My Way (Freedom Ain’t Free), a near-perfect replica of Pete Rock & CL Smooth’s classic T.R.O.Y. (They Reminisce Over You). Instrumentally, this replica lacks the same kind of force from the drums of Pete Rock, but nonetheless it is still undeniably the best song on the album, ticking off every requirement on any checklist you can compile towards what makes a great rap song. Lyrically…well:

“If poverty is chocolate, and privilege vanilla,
Then what’s the flavor of the Sunday preacher’s paedophilia?
Cash rules everything around these ni**az,
As classrooms everywhere around me wither,
Hither you can be Mr. Burns or Mr. Smithers,
The tyrant or the slave, but nowhere in the middle-a
the extremes of America’s Dream,
Freud fighting Neo, Freddy Kruger refereeing…”

Exemplary of Lupe at his finest – listeners who prefer not to dig too deep into meanings can appreciate the imagery, but those (like myself) who get a kick out of the mental exercise find it worth analysing such songs line by line and sharing interpretations with other like-minded Hip Hop fans. Even songs like Bitch Bad see Lupe breathing new air into the eons-old discourse on the word “bitch”, and portrayals and subsequent perceptions of women. I cannot not list songs like Form Follows Function, Audubon Ballroom and Unforgivable Youth as further examples of the incredible sensation of Lupe’s return; that said there are still instances of ‘LASER-Lupe’ (yes, I’m sticking with that term).

There are no nauseatingly bad moments, just ones which trigger little to no emotional response and make you rush to hear what else there is. ITAL (Roses) is arguably Lupe at his most basic, lyrically and musically…really, have we not yet grown tired of rolling snares yet? Similarly bland, synth-driven production plagues Lamborghini Angels but the lyrics do make it listenable. And the Guy Sebastian-collaborative ballad Battle Scars screams radio appeal with Eminem-like mechanical production really only finds its place on the album because of songs like ITAL (Roses). But even the lighter songs on the album can still sound solid, like How Dare You (featuring the criminally-overlooked Bilal), which is F&L2’s Can’t Get You Out Of My Head counterpart. I said it before and I’ll say it again, no nauseatingly bad moments.

There are no two ways about it – Lupe Fiasco is well on the return to full form, and Food & Liquor II: the Great American Rap Album is the set of rails that assures his locomotive-like recovery into the artist that can engage with listeners on varying levels of musical and lyrical appreciation without heavily favouring one over the other, doing so much right over 60-odd minutes that you can almost forgive what it does wrong. Apart from its glaring yet few-and-far-between pop sensibilities, this is already cemented as one of the best Hip Hop releases of 2012.

You may also want to have a peek at these reviews: The Expendables 2, Slaughterhouse, Nas.