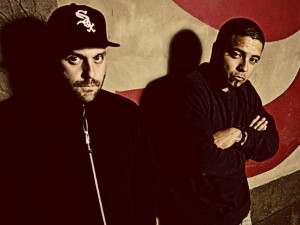 The single pulls inspiration from a previous track the group released called Shewolf. “Shewolf’ was a warning that women all around the world have a dark side, and at times will play with your emotions if you let them,” ever the diplomat Onry Ozzborn explains. “‘Never Cry Wolf’ is about one of those girls, as she comes to the realisation that the man she’s spent so long tempting is, in fact, the one for her.” But by then, explains Dark Time Sunshine, it’s too late – the man of her desires is no longer interested.

The video is directed by Stephan Gray and set in the deep woods, with Onry, Zavala, and Reva surrounded by lush trees and striking scenery. The visual follows the tone of the song, opening with Reva elusive amidst dense trees and hanging sheets as Onry follows in pursuit. By the end of the video, though, he’s given up, just as Reva turns in search of him. “He’s no longer having it,” says Onry of the song’s protagonist, “he’s done being vulnerable.”