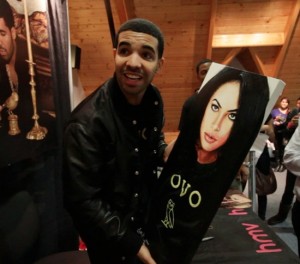 “Hey guys, does this look creepy?”

Drake has made no secret of his admiration, or you could say obsession, for late R&B singer Aaliyah. Drizzy has two tattoos of Aaliyah on his body, including her date of birth (‘116’ for January 16) and a picture of her face, which he had applied to his back.

He also sampled the singer’s classic track At Your Best (You Are Love) for his 2011 song Unforgettable. Now he’s taking things to the next level revealing a new posthumous collaboration. Produced by Drake’s right-hand man Noah ’40’ Shebib, Enough Said is billed as Aaliyah featuring Drake.

Along with the collaboration rumours have been persistent that Drake will be helping produce a new album of unreleased Aaliyah material. While her family has denied the supposed new album Drake has sparked talk, particularly after an interview earlier this year with UK DJ Tim Westwood. “I have some great Aaliyah news coming soon,” Drake said cryptically. “Just some special things.”

Regardless, hometown boy Drake debuted new single Enough Said at the OVO Festival in Toronto earlier today to positive response. Whether the album materialises is another story.

UPDATE (09/08/12): Rashad Haughton, Aaliyah’s brother, has taken to his sister’s Facebook fan page to clarify that no album officially backed by the family will be released. “There is no official album being released and supported by the Haughton family.”