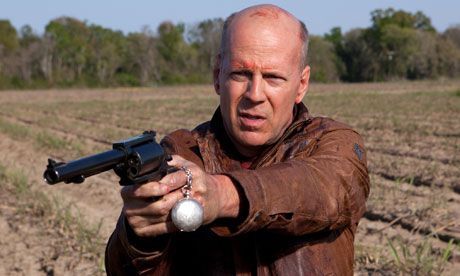 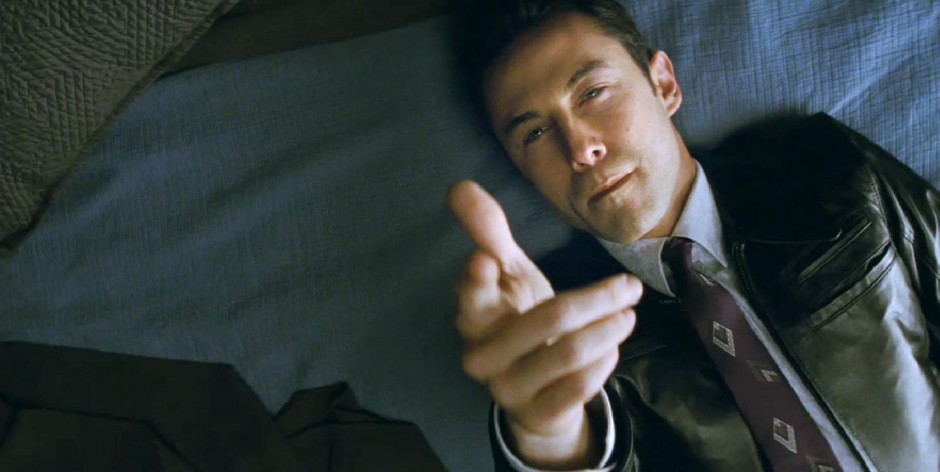 What’s this? An action sci-fi that isn’t convoluted or confusing but instead incredibly original and exciting? That’s exactly what you’re in for with Looper, one of the best blockbusters to be released this year and with a huge surprise, every badass moment throughout is earned with some great character development and plot.. Well, almost.

Joseph Gordon Levitt stars as Bruce Willis. No, no let me try that again, Joseph Gordon Levitt is Joe, a 20 something year old looper in the year. 2044. If you’re wondering what in the hell a looper even is, it’s basically the guy responsible for killing people who return from the future, looper’s know where they emerge from and kill on sight, without a minute’s hesitation. Time travel has not yet been invented in 2044 but it has in the future, in about 30 years. Looper’s don’t question their jobs or the physics of time travel but simply sit in a field in Kansas where the portal is, holding a large gun, waiting for the person from the future to emerge so they can be killed, it’s as simple as that.

Joe, isn’t one for the details of it all but merely does what he can to save up for a trip to France. He’s a loner who takes a lot of drugs and has frequent associations with a local prostitute. He’s a cold individual who does what he can to protect his interests. This however changes when one evening, the figure that emerges from the portal is his future self (played by Bruce Willis). Of course, Joe fails in killing him and is on the run from his employers, a quick witted yet violent mobster, Abe (Jeff Daniels) and a gun totting yet unreliable henchman, Kid Blue (Noah Segan). Joe’s older self is also hiding from the henchmen yet is on a mission to prevent a tragedy from happening in his future while younger Joe finds himself in the care of a young farmer (Emily Blunt) and her 5 year old son. He still intends on killing his older self and clearing his name yet their paths are soon to cross as his older self is heading their way.

How’s that for an original plot?

This is all thanks to Rian Johnson (Brick, The Brother’s Bloom) who is a creative force to be reckoned with as well as one who knows to respect the audience with great screenwriting and meticulous direction. Trust an art house direction to understand how a fun yet substance filled big budgeted film should go.

What’s so refreshing and invigorating about Looper is the attention to detail in both the plot and it’s characters. Also, as mentioned, the originality of it all! Yes, some plot developments dwell on cliche and the ending could’ve been a little better but this is unlike any recent film to be released as of late. It takes very few conventional routes in its approach to the story, including brutality which the story benefits from this time around. Most sci-fi blockbusters that are released these days carry an M rating (or most notably a PG-13 in the states) but that’s not the case with Looper, characters swear, the violence is bloody, essentially, you’re aware from minute one that these characters aren’t caricatures but instead real people with serious flaws, which helps in convincing the audience that all of the plot details in which these characters have to work within are beyond rational and logic, yet the movie takes its time in explaining all of the details to the audience.

When all is said and done however, Looper is not a perfect film. Like most films the minute the plot’s direction is revealed, the protagonist always tends to hide out somewhere where we meet the female lead or essentially the love interest, played pretty damn immaculately by Emily Blunt. The shift in tone and pace changes and you either go with it or don’t. But it doesn’t derail the narrative/story.

To also make it clear, the performances are also outstanding including a makeup covered Joseph Gordon Levitt, and with special mention to Jeff Daniels, Noah Segan, Paul Dano and Garrett Dillahunt, who plays a bounty hunter,the best in the business his time on screen is pretty outstanding, but above all, Bruce Willis is back to being badass. One scene in particular just proves why we loved him in the first place and why we’ll always rely on him to deliver the action and fun.

With the exception of one scene, Looper is a tight, exceptionally well written and directed action sci-fi that’ll restore your faith in blockbusters and just gives you another reason to want to go to the movies yet also serves as a reminder as to what we love about original storytelling.

You may also want to have a peek at these reviews: The Girl with the Dragon Tattoo, Underworld: Awakening, Skyfall.