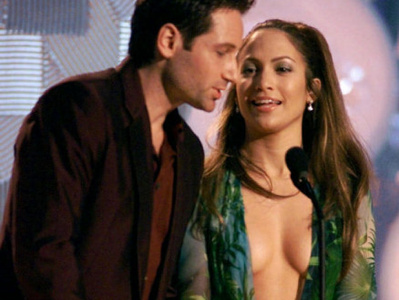 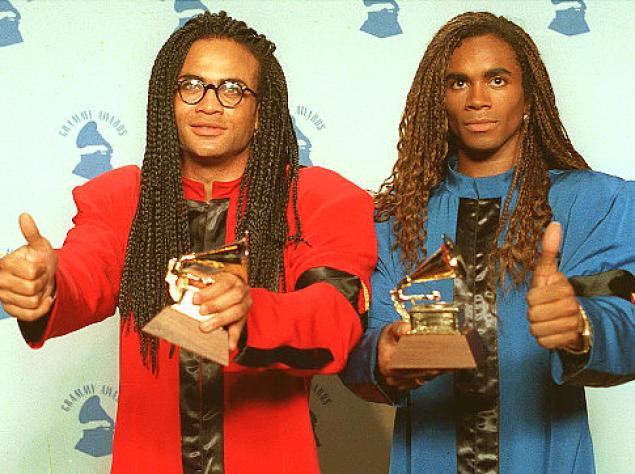 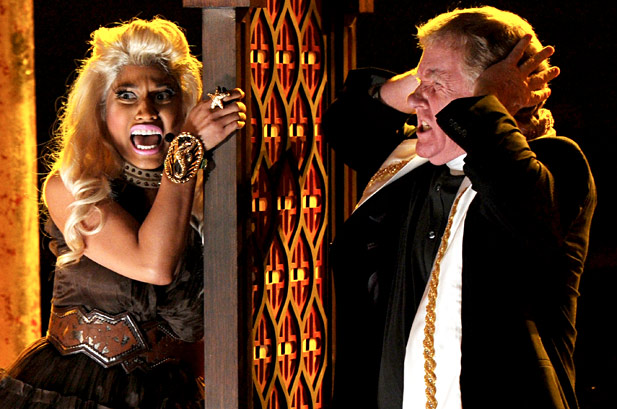 We thought we would publish just one more Grammys item. This one is  thanks to the good people at Billboard who have listed a bunch of moments that many would love to forget or love to revisit. Some crashed the stage to ramble about children and others performed interpretive dance. From a famous fight and a ballsy boycott to one untimely passing, these are the 10 weirdest, wildest and most outright shocking moments in Grammy history.

Nicki Minaj’s 2012 Grammy performance was awkward, to say the least. The theatrical five-minute live rendition of her new singles Roman’s Revenge and Roman Holiday included dancing ‘priests,’ an exorcism and levitation. This major broadcast of Nicki’s kooky, fright-faced Roman Zolanski persona ended up being a bizarre, disjointed head-scratcher for all but her most dedicated Barbz.

The ever-controversial Sinead O’Connor, the same singer who tore up a photo of the Pope during a live SNL performance, made a splash at the 1990 Grammys by refusing to show up. According to O’Connor, her absence from the ceremony and subsequent refusal to accept her Best Alternative Music Performance trophy for I Do Not Want What I Haven’t Got was her way of boycotting the 33rd annual awards. When queried about the decision, she maintained that her reasoning stemmed from the award show’s extreme commercialization. The real question is: Did anyone miss her!?

Jennifer Lopez caused a national commotion when she and fellow presenter David Duchovny came onstage to give out the first award of the 2000 Grammys. Her green Versace gown, with a “neckline” that plunged past her navel and a hemline threatening indecent exposure, looked more like a music video getup than an awards show dress. J.Lo’s dignity was only salvaged by a bikini-area brooch holding the entire creation together. The audience whooped and catcalled to show their appreciation, while Duchovny stepped aside to let J.Lo have the spotlight.

Did Elton John turn a blind, queer eye at the 2001 Grammys when he appeared on stage with accused homophobe Eminem for a rendition of the rapper’s nominated Stan? That’s certainly what many of his homosexual peers thought, as they howled in protest despite Mathers and John’s amazing performance of the song. The friendly hug at the end probably fanned the flames of their anger a bit too.

Lady Gaga delivered a spirited performance of her new single, Born This Way, at the 53rd annual Grammy Awards, but the pop star made a more memorable and decidedly odd appearance on the red carpet, when she showed up inside a giant egg. Mother Monster arrived at the Staples Center’s red carpet encased in an egg-shaped vessel that was carried by scantily clad servants in flesh colored garb. Proving that she was indeed in the egg-like pod, Gaga eventually peered out behind black sunglasses and waved to the red carpet cameras. A few hours later, Gaga hatched from the egg in time to hit the Grammy stage to perform, wait for it, Born This Way.

50 Cent’s silent, casual 2004 intrusion onto the Grammy stage during Evanescence’s Best New Artist win raised eyebrows. But Wu Tang Clan’s Ol’ Dirty Bastard had already perfected the acceptance speech stage crash six years earlier. At the 1998 Grammys, after Wu Tang lost to Puff Daddy for Hip Hop Album of the Year, ODB took to the stage and defended his Clan during an acceptance speech for a category the group wasn’t even nominated in. Confused? So was Shawn Colvin. She couldn’t even bask in glow of her win for Song of the Year before ODB began his bizarre ranting. For the record, ODB wanted people everywhere to be sure to know that Wu-Tang is “for the children.”

Rihanna and Chris Brown’s reign at the top of the charts was a solid one, but all it took for their personal lives to crumble was a text message. The night before the 2009 awards, the couple attended Clive Davis’ pre-Grammy party in good spirits and health. But the evening took an ugly turn when reports surfaced that Brown had been involved in the assault of an unnamed woman. When a photo of Rihanna’s battered face leaked online shortly thereafter, the truth became all too clear. Announced via a terse press release from the Recording Academy, the sudden cancellation of the duo’s Grammy appearances just hours before the ceremony ignited the firestorm of coverage of the incident. A disagreement over a text message turned violent, and Rihanna was left bruised and bloodied – as was Brown’s career.

Milli Vanilli couldn’t blame this one on the rain: the German duo with a string of hits in the late ’80s won the 1990 Grammy for Best New Artist, but the celebration didn’t last long. In November of that year, it was revealed that singers Rob Pilatus and Fabrice Morvan hadn’t sung at all the two were merely the faces on the cover of the multi-platinum debut album. For the first and only time ever, a Grammy award was revoked. When asked by reporters how they expected anyone to take them seriously, Pilatus just laughed and said, “Ha! Good question.”

When a backup dancer decided to take center stage during Bob Dylan’s 1998 performance of his Grammy nominated Love Sick, he made Grammy history. Ripping off his shirt to reveal the puzzling phrase ‘Soy Bomb’ scrawled across his bare chest, the gyrating performer got away with almost 40 seconds of spastic dancing on international television before security realized something was amiss. Even Dylan himself barely gave him a scowl. The dancer was lucky that his Grammy explosion didn’t cost him as no charges were laid.

The night before the 2012 Grammys, just hours before Whitney Houston was set to hit the stage at a pre-Grammy party, the legendary singer was found dead, underwater in a Beverly Hilton hotel bathtub. The oft-acclaimed vocalist had famously battled drug addiction, though she’d appeared to be sober in the days leading up to the weekend that she drowned. Toxicology reports would later reveal that she had several drugs in her system. The news of Whitney’s sudden passing immediately rocked the music world from industry and musical peers to fans everywhere and it certainly cast a somber shadow over the usually celebratory weekend. But the show went on. Host LL Cool J opened the Grammys with a unscripted prayer for Houston. And later in the show, Jennifer Hudson received a standing ovation for her heartbreaking, heartfelt performance of Houston’s, signature song, I Will Always Love You.