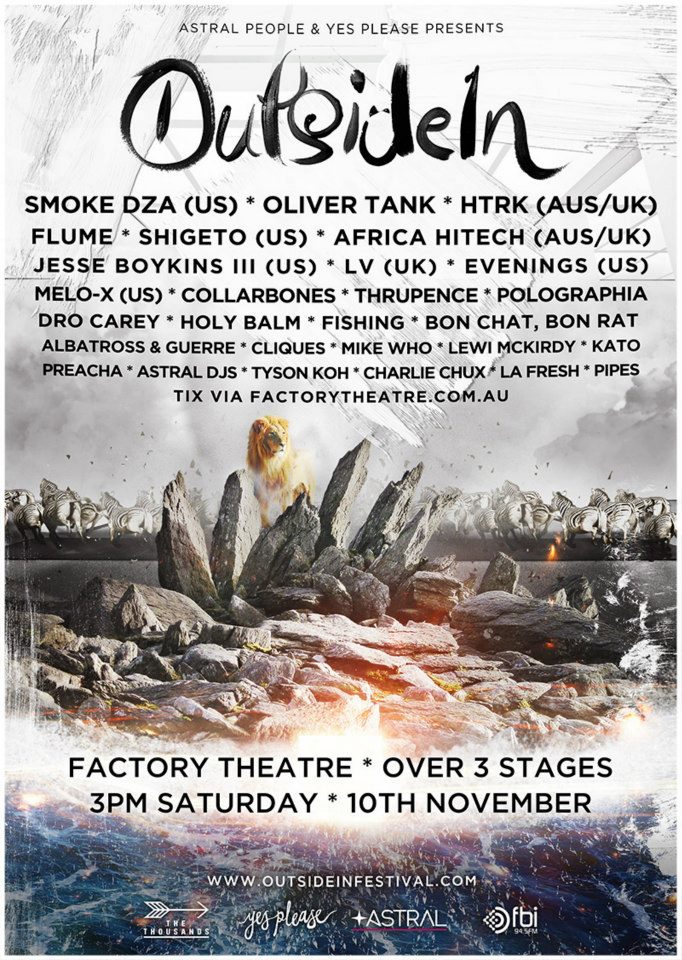 OutsideIn is a boutique cultural adventure set to refine Sydney’s burgeoning musical landscape. Taking place at The Factory Theatre on Saturday November 10th, it’s the embodiment of a world-class event, bringing together a brilliant line-up, beautiful weather, tasty food, refreshing drinks, great company and of course, unbeatable music with a bespoke lineup of international future-stars to appear over three stages.

From the hazy Harlem Hip Hop of Smoke DZA (USA) to the warped RnB of Jesse Boykins III (USA) and Collarbones, a rare live performance from Oliver Tank hints at the contrast of world-grade talent on display. Add to this the DIY attitude of HTRK (UK/AUS), the lush beat work from Shigeto (USA), Flume, Melo-X (USA) Thrupence and Polographia whilst topping off with the late-night electronica of Africa Hitech (UK/AUS) and Dro Carey, the first announcement is a cross-field beacon of acts previously unseen on any stage in Australia.

And if all this wasn’t enough, OutsideIn is proud to offer one of Sydney’s most relevant events for a price that won’t hurt the pocket (and encourages discovery). Early bird tickets go on sale Wednesday August 8th for $44 +bf, until sold out. With general admission to follow for $49 +bf, tickets can be purchased from The Factory Theatre’s website.

With a very limited capacity and taking place at Sydney’s Factory Theatre on Saturday November 10th, OutsideIn will be keeping an ear to the future and an eye, as always, to the stars…

Stay tuned for a second and third artist announcement to be made in the coming months.

+ Many More To Be Announced