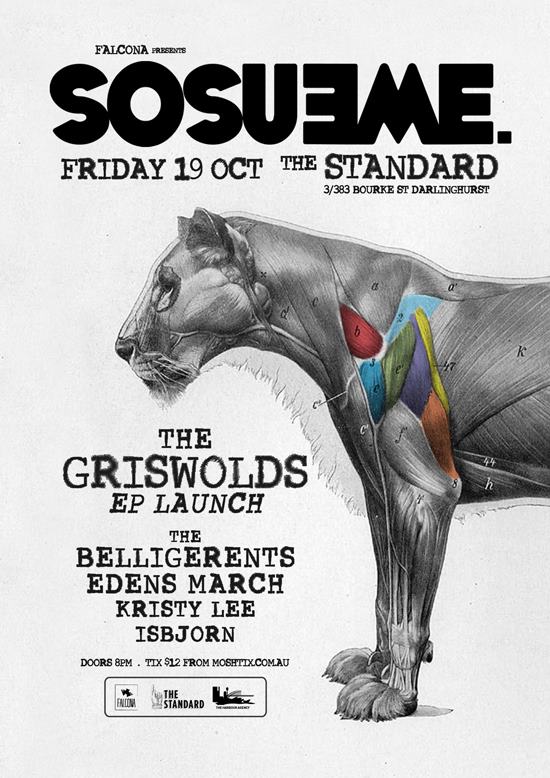 et your party pants and shiny shoes on for another night at The Standard with the Sosueme crew. Along with live Aussie acts from The Belligerents and Edens March, we are helping launch The Griswold’s newest EP. To keep the night going til the early mornin’, Kristy Lee and Isbjorn will be ending the night with their head nodding DJ sets.

The Griswolds are an indie pop rock group also known as ‘chameleons of pop’, who are set to rock your world with their latest songs from their upcoming EP, Heart of a Lion. Before they head on their tour of the rest of Australia with their EP, they are stopping by Sosueme to show you everything they’ve got and more.THE BELLIGERENTS ::
Heading all the way down to Sydney from Brisbane are The Belligerents, a five-piece indie/dance band. These boys will have you dancing all night long with their face melting repertoire. Make sure you fit in a little gym training sesh just to keep up with these guys.

KRISTY LEE ::
Sosueme regular, Kristy Lee is one of Sydney’s busiest DJs, constantly running around to deliver sock knocking sets for you lovely peeps. Bringing an indie tilt on all that is bounce, dance and new-wave, KLP has got any affair covered, switching it up to deliver a unique and monstrous set of hip swagging grandeur.

Another Sosueme regular, Isbjorn is set to play an amazing DJ set to end the night of all nights. Don’t miss out!