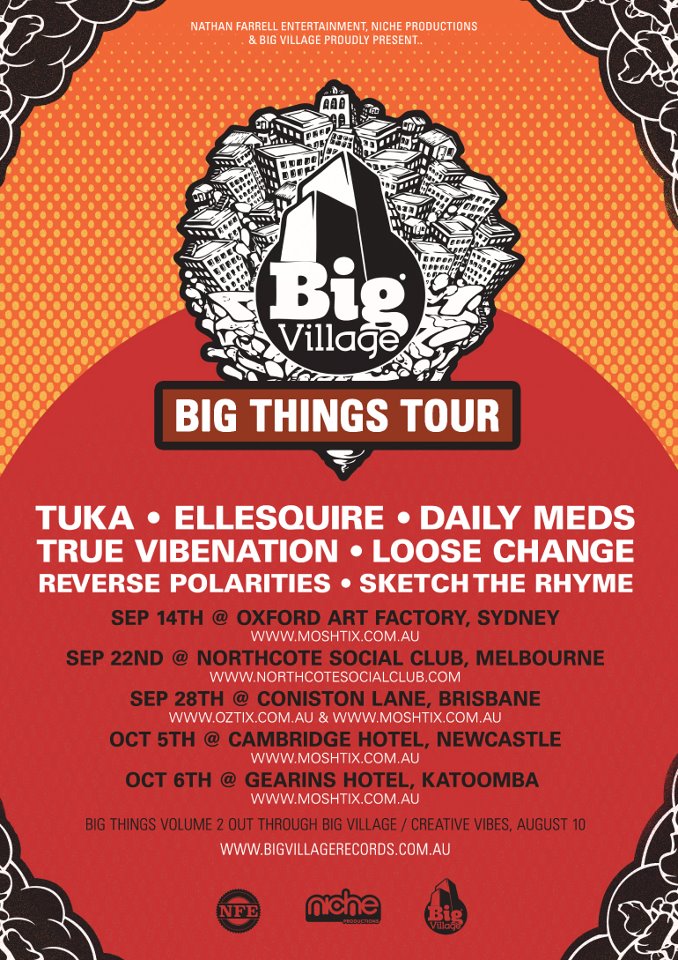 Click on the image above to visit the event page.
‘Big Things Volume Two’ out August 10 through Big Village.

Big Village Records are thrilled to announce the forthcoming release of “Big Things Vol Two”. To celebrate this release, the entire label roster will be jumping on the tour bus and taking the show on the road for the Big Things National Tour this September + October.

CHECK OUT NEW BV POSSE TRACK ‘THIS IS THAT’ HERE – http://soundcloud.com/bigvillagerecords/this-is

Dropping August 10th, “Big Things Vol Two” is the labels latest compilation and features all exclusive new tunes from Big Village founding members Tuka (Thundamentals), Ellesquire, Daily Meds, True Vibenation and Loose Change, as well as collab tracks and solo tunes from Reverse Polarities, Suburban Dark, Rapaport, Klue and Tenth Dan. In what can only be described as a gargantuan undertaking by anyone’s standards, to celebrate, they’re taking the whole damn label on the road for a national tour to launch said album– that’s nearly 20 of Sydney’s finest MCs, DJs and Producers. Please read on.

Since its beginnings in 2010, Big Village has been a collectively run and forward thinking label that has focused on raising the standard of quality and diversity in the Australian hip hop landscape. Big Village was originally created by 13 predominantly Sydney based hip hop artists, MCs, DJs and Producers (namely Daily Meds, Loose Change, True Vibenation and members of Thundamentals, Tuka and Jeswon), many of whom had already been working together for years. Hence, all seeking a platform to release high quality hip hop music, they combined their networks, skills and support to create their own record label, owned and run by the artists it represents.

“Big Things Volume Two” will be Big Village’s 8th official release and the list of achievements across those releases has been exceptional. Suffice to say that for starters, between all Big Village Acts, main projects and side projects inclusive, there’s been about 10 tracks on triple j rotation since the labels inception.

Here’s a taste test of the Big Village posse’s live video ‘Be My Guest’. All audio and video was recorded live from one single take on a rooftop and illustrates the diversity and skills of the various artists, as well as the joy and natural chemistry between them as label mates: http://www.youtube.com/watch?v=g5EkZkfzUio

“Big Things Vol Two” is as creatively adventurous as it is maturely executed, a darkly tinged buffet of bass heavy tunes that range in style and content but share a no bullshit attitude to making hip hop music. Released in May last year, Big Village’s first label compilation “Big Things Vol 1” was both the Triple J hip hop show ‘s and FBI ‘s ‘Album Of The Week’. The label itself was nominated for a 2011 SMAC award for BEST COLLECTIVE (FBI radio).

Big Village has undertaken the audacious task of taking their entire label on the road for the BIG THINGS tour across September / October. The tour will feature the full roster of current label acts including Tuka and Ellesquire performing a dual headline set, Daily Meds fresh from their ‘Happy Daze’ album release and tour and True Vibenation who also recently completed their own national tour. Coming along for the ride are Loose Change, Reverse Polarities and speed-draw-freestyle-rap-gameshow Sketch The Rhyme, featuring Big Village members Rapaport, P.Smurf and Jeswon.

That’s a lot of people, but then that’s why it’s called the BIG THINGS tour folks. The tour also represents the first time proper that the Sydney based label will truly unfurl itself at a national level, so look out. From the Annandale to The Oxford Arts Factory, the last 4 Big Village presents shows in Sydney have all sold out.
The Big Village fam invites you to come and experience this travelling party and get a sense of the groups undeniable passion and respect for both each other and the wider hip hop community, check it: