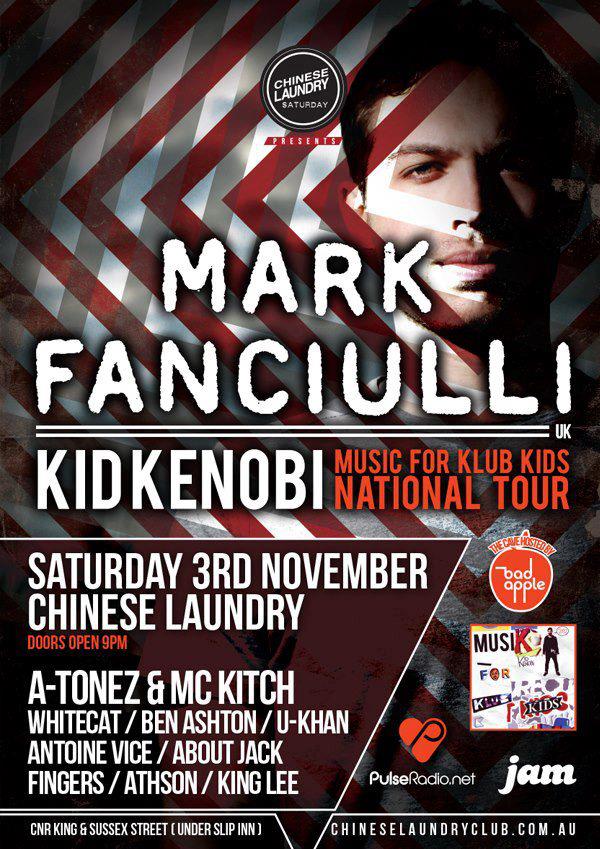 Chinese Laundry is kicking off a massive month of headliners with one of the fastest rising talents in the Tech House and House scene.

This Saturday the 3rd of November, headlining in the Cave we bring you MARK FANCIULLI, the artist responsible for one of the most charted tracks in 2011 “The Tide”.

Mark Fanciulli has had an incredible 12 months. Aged 25 and with just three solo releases, it’s surprising how fast he has shot to fame. His release ‘The Tide’ which came out on Rejected in 2011, caught the en

tire industry’s attention with Joris Voorn’s edit being one of the most charted tracks on Resident Advisor last year. The track has since been nominated for 2 IDMA’s at this years WMC conference.

Mark’s next release ‘Keep On’ on Area Remote, a collaboration with Jordan Peak, equally saw him gain recognition – so naturally 2011 ended with worldwide DJ gigs at some of the most established venues in London, Istanbul, Padova and many more.

Whilst visiting some of the worlds biggest clubs Mark has similarly played alongside some of the most critically acclaimed DJ’s such as Damian Lazarus, Joris Voorn, Paul Woolford, Mark Broom and Heidi to name a few.

Throw into the mix the crew from BAD APPLE who are hosting the Cave for the night, and we can guarantee this is going to be a quality party that you won’t want to miss…..

In the Laundry we have returning local legend KID KENOBI alongside a whole host of Chinese Laundry regular big names including Blaze Tripp , U-Khan & A-Tonez who will feature with an amazing MC KItch

Links to check out