Collarbones and Naysayer & Gilsun @ The Standard 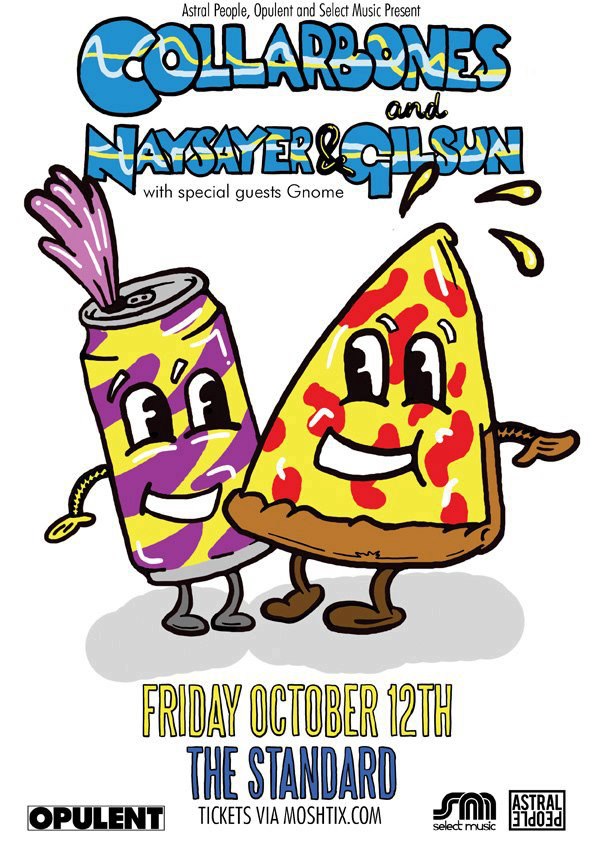 Astral People, Opulent and Select Music are extremely excited to team up and present a night of beats, visuals and saucy dance moves with a special co-headline performance from two of Australia’s most exciting electronic acts Collarbones and Naysayer & Gilsun.

Set for release on Friday 28 September 2012 via Two Bright Lakes / Remote Control, Collarbones will be launching their sophomore album Die Young, which was written over the course of a year, during the promotion of the duo’s 2011 debut album Iconogr

aphy. Inspired by recollections of teen crushes – the naive, vulnerable yearning at the heart of adolescent experience – the songs emerged as a tribute to the modern mythology of youthful desire. Framed by a soundtrack of jilted R&B instrumentals, Die Young joins with whole generations mourning for their fallen idols.

Since the release of Iconography Adelaide’s Travis Cook and Sydney’s Marcus Whale have spent more time (physically) together than usual, supporting and playing with a slew of international and local outfits. Collarbones explored their sound and the dynamics of physical closeness over the past year, supporting Neon Indian and Daedelus and touring with label mates Oscar + Martin as well as Ghoul, Donny Benet and The Paper Scissors. The duo were handpicked to play triple j Unearthed’s Parklife slot, the inaugural Sugar Mountain Festival in Melbourne, and FBi’s Sydney Sounds Like, all tightly curated affairs. Their live shows and the release of Iconography has seen them nominated for a Sydney Music, Art & Culture (SMAC) Award as well as an AIR Award (Australian Independent Record Labels Association).

Melbourne duo Naysayer & Gilsun began DJing at house parties in the late 00s. After two years of club residencies in Melbourne and releasing cut-and-paste party mixtapes, the duo shifted their attention to a new venture: NGTV. In NGTV, a feature-length audiovisual experience, the pair remix music, film, and television live, and project the results onscreen for all to see.

NGTV relies less on instantly recognisable samples and more on aesthetic coherence. Electronic and dance music from across the spectrum meshes and interacts with remixes of dreamy, youthful and vibrant film sequences. French new wave obscurities, hollywood blockbusters and deep electronic music play alongside each other in the name of a simple idea: different forms of media can elicit the same emotions. The pair’s obsession for high definition content and precision editing has created a visual experience that is totally immersive, where this idea can be played out in its ideal setting.

In the wake of sell-out instalments of the show at Melbourne’s Hi Fi bar and the release of a video-mixtape series through their label Bossman Records, the duo have toured extensively – appearing throughout the country and abroad at festivals such Golden Plains and Groovin’ The Moo. Currently, they’re locked in a small, dark room finishing a debut EP of original music to be released later this year.

Joining Collarbones and Naysayer and Gilsun will be the brother and sister duo Gnome. Fresh off winning the Sydney Festival Soundtrack and featuring half of pop experimentalists Kyu, they weave their music utilising a fusion of their interest in classical and world musics as well as a passion for electronic, glitchy sonics.

So come down and party like you would in your bedroom while listening to Beyonce and jumping on your bed.