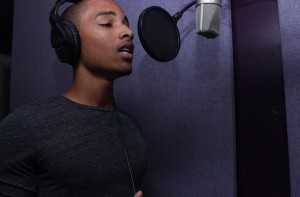 As the race for the U.S. Presidency heats up the candidates are going into overdrive to earn the votes of every interest group or minority they can think of. One young man, Andre Todd Hobson aka Champ, is doing his part.  The 19-year-old recorded Vote 4 Justice (peep the song below) as a way to move his peers to make a difference in the upcoming presidential election. If dead prez were advocates of the U.S. Army it would sound like this track.

The song was originally penned as a contribution to the Black Youth Vote (BYV!) iThink 2012 initiative, organised by the National Coalition on Black Civic Participation.

What Hobson didn’t realise at the time he recorded the song was how soon his lyrics would become a reality for him. The Richmond, VA native will report to basic training for the U.S. Army on July 31, just a week after hitting the studio to lay down the song.

He will make a difference by serving in the Army to protect the country and our democratic process.

On Vote 4 Justice, Hobson tells his peers to utilise and not squander their power to vote. William Kellibrew IV, deputy director and national victims advocate for the National Coalition, is featured on the hook.

“Andre did an excellent job of translating our message into hip hop vernacular,” said Jessica Brown, like a true stuffed-shirt. The national field coordinator for BYV!, Brown continued “we are working hard to educate our young people on the connection between voting and laws like ‘Stand Your Ground.’ Everyone wants justice for Trayvon Martin and others like him, but young people have to realise that those laws were voted in. We have to vote those laws out and keep voting so they don’t pass any more laws that are not in our interest.”

BYV! is a national grassroots organisation committed to increasing political and civic engagement among Black youth and training young leaders. Andre Hobson is a prime example of one such leader.