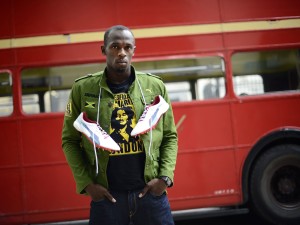 Sprinter Usain Bolt of Jamaica poses with his running spikes and official team uniform for the London 2012 Olympic Opening Ceremony during a photo shoot, arranged by his sponsors PUMA, beside a traditional routemaster bus outside the British Museum in London, in this June 1, 2012 file photo. Silence will envelop the Olympic stadium on the evening of Aug. 5 while the world’s eight swiftest men crouch in their blocks awaiting the starter’s gun. What happens in the split second after the gun fires and the stadium resounds to the clamour generated by 80,000 spectators will in all likelihood determine the result of the men’s 100 metres final. REUTERS/Dylan Martinez/Files (BRITAIN – Tags: SPORT OLYMPICS ATHLETICS)