Kanye West is an entity of his own and never takes the traditional route.

Last night the multi-platinum rapper launched his new album by promoting its first single, New Slaves. He did this by projecting his face across 66 multi-storied buildings worldwide.

Yeezy announced the event on Twitter with hundreds of fans gathering at each location to see what the rapper had in store.

NEW SONG AND VISUAL FROM MY NEW ALBUM BEING PROJECTED TONIGHT ACROSS THE GLOBE ON 66 BUILDINGS, LOCATIONS @ KANYEWEST.COM

The video was projected at multiple times throughout the night across several major worldwide cities, including New York, Toronto, Chicago, London, Paris, and Berlin. It even made it down here to Sydney, Australia.

Running one and a half hours later than schedule, the final stop for the roving projector handled by Universal Music was a location near “George Street South”, Pedestrian TV made a hypothesis of Martin Place. Universal Music kept the tweets coming in order to keep the hype surrounding the guerrilla-marketing stunt. The congregation came and went as the minutes to hours ticked past 11pm. Finally a crowd of about 50 people stood to watch Yeezy rap. The sound was disappointing due to unsatisfactory speakers but the message of the track was clear. New Slaves is a dark and brooding tune, brimming with intense emotions about the state of society through West’s eyes.

Check out the stunt below (language may be NSFW).

At Martin Place, the first projection ended with one fan yelling “Thank you Yeezus!”, an appropriate line indeed as today the announcement came that the title of Kanye’s upcoming album on June 18 will be Yeezus.

Rap-Up confirmed the title of the album, and girlfriend and baby-mumma of Ye, as well as his manager Don C. later posted a photo of the what-looks-to-be-unfinished album art as well as a pair of red Yeezy IIs with a tag ‘Yeezus’ to their Instagram accounts. 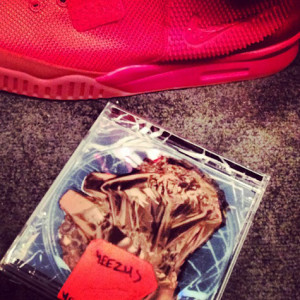 Kanye has been in the studio with Daft Punk, who programmed drums for the album.

“It was very raw: he was rapping—kind of screaming primally, actually,” Thomas Bangalter of the French duo told Rolling Stone. “Kanye doesn’t give a f*ck.”

Billbord has put together a great infographic outlining what we know about the album so far (click to enlarge). 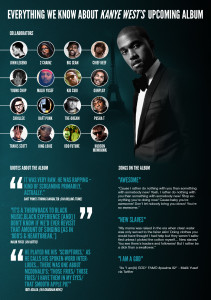 So what are your thoughts on New Slaves? Are you looking forward to the return of Yeezus?

Read more about Kanye West:
Kanye West on the set of Anchorman 2
Say What: Kanye West’s New Album to release on June 18… maybe?