Drake’s Dad Leaks Track Listing For Nothing Was The Same

Drake’s Dad may have leaked what appears to be the back artwork including the track listing for the rappers upcoming album, Nothing Was The Same, as well as its release date.

Drizzy was planning to drop the album later this year but Dennis Graham, the rapper’s father, seemingly posted up a track listing on his Instagram profile over the weekend before quickly removing the image suggesting it might be the real deal.

It is yet to be confirmed whether the image is real or a hoax, if it’s genuine then the album seems the album will be released on August 27, and is to feature 15 songs in total and includes Started From the Bottom, however, omits other songs Drake has released in anticipation of the new album, such as Girls Love Beyoncé and 5am In Toronto.

Also, it confirms rumours of a Drake and Jay-Z team-up on a song called Know Yourself. Other collaborations include Frank Ocean, Justin Timerblake, A$AP Rocky, Lil Wayne and Saukrates among others, plus production from Timbaland, James Blake, Boi-1da, Mike Zombie, Swizz Beatz, 40 and T-Minus.

Little is known about Drake’s upcoming third album, so the leak is a huge deal to die-hard Drizzy fans. 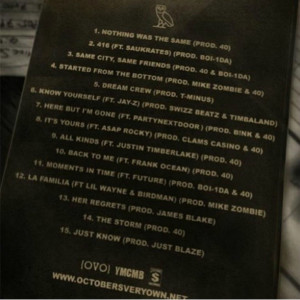