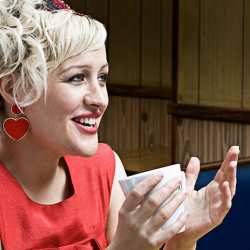 To Dust is the first solo album from Alice Russell since 2008’s acclaimed Pot Of Gold. Her new offering sees the songstress exploring every letter of the soul lexicon and beyond to create her own dynamic sound, from the punchy, Prince-esque strut of Hard And Strong to the epic intensity of the title track. On heartstring tugging tracks such as I Loved You, Alice is never less than scintillating as she displays her trademark raw emotion and unparalleled versatility.

First single Heartbreaker, highlights the crisp, cutting edge production and eclectic influences that nestle alongside a love of vintage soul at the core of Alice Russell’s style. The video for the single stars long-time Alice fan Harry Shearer (The Simpsons/Spinal Tap) and has already had 47,000+ YouTube views.

Alice’s unique sound has been honed over the years with co-writer/producer TM Juke. With her stand-alone vocals one of the most highly in demand over the last decade, Alice has recently guested on Talking Heads’ leader David Byrne’s solo LP, to add to collaborations with Mr Scruff, Quantic, DJ Yoda, Nostalgia 77 and lending her vocal stylings to the latest Fat Freddy’s Drop album.