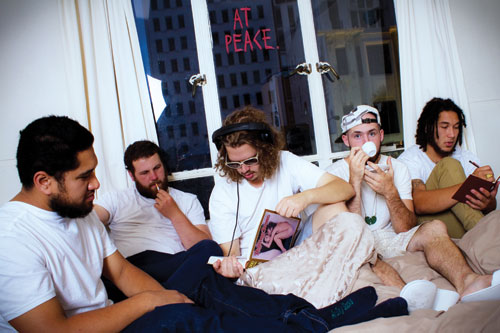 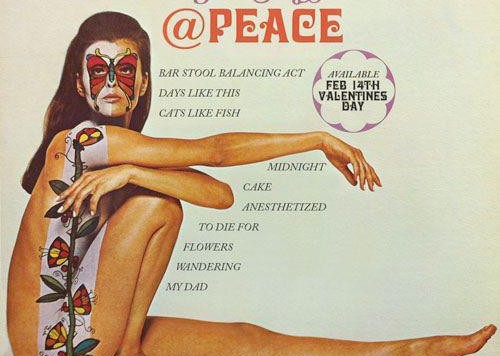 Hip Hop has been adopted by many cultures across the world. Sometimes it’s hard to say what’s dope and what’s wack, but then again it’s easier to mess it up than it is to get it right. This New Zealand group @Peace is an example of what is means to do Hip-Hop justice. Coming together in 2011 out of their own separate music factions, these five members have managed to encapsulate in their new ten track EP Girl Songs about Tom Scott’s failed relationship, what fans have said to be, “…On some other level shit; the production is on some J Dilla / Madlib flow.” Having reached number one on the iTunes and Bandcamp chart with it, @Peace has decided to release a physical version of their latest EP Girl Songs and have already started celebrating with a release show at Nectar bar in Auckland on March 22, and again at Bodega in Wellington on March 29. We were able to grab a hold of Lui to discuss some of the ideas behind the EP as well as how they conduct in the Hip-Hop community.

How did you guys come together to do the Girl Songs EP?

I think it was sort of like what was happening personally with some of the band members and shit and as a writer you can only write about what you know and just like what was happening… When you learn a hard lesson that’s when you fully understand discussions or the effects of your action or thoughts or whatever it could be.

Aren’t you guys all from different groups and you guys decided to come together and do this right?

We’ve been in a group for a couple of years now, dropped the first release and just dropped Girl Songs album recently…

I noticed you guys have a jazz, funk, old school, neo-soul and conscious rap sound all mixed in, is there any specific artists that influenced your sound?

Personally can’t think of anyone specific who we kind of emulated that was just the kind of music we were making at the time or into at the time…To be honest for me as a ‘rhymer,’ the people that has an influence are just the people in our circle…YGB…Team Dynomite, Johnny Rescue and Tom, all these amazing dudes who are sticking out for their jobs, to me that’s what influenced me…A lot of it was on the producers and they’re all improving dramatically and sort of that’s just what we were writing at the time, as MCs that’s what we were writing at the time and shit.

Is Girl Songs apart of a grand compilation in this project of what has been described as “space, finality and quantum?”

Let’s say people have never ever heard of you guys or your music, how would you describe yourself to them?

Ah fuck, that’s hard. I seriously wouldn’t know how to answer that question—Hip-Hop? I don’t know. It’s just hard because the sound is always progressing and moving forward and we have so much influence from other genres of music, so you just take what you know you can and apply it to your own craft.

What made you guys set the EP at a “pay-what-you-want” price?

I think first of all it’s just an EP it’s not like the [eidola] of our shit—it just sort of makes sense when a lot of the time people don’t— I haven’t bought music in a long time, you know, but it still gives people the opportunity for people to appreciate it, so they pay what they feel It’s worth it for it.

Talk to me about the physical Girl Songs EP you all are coming out with, Will there be any bonus tracks on it?

It’ll just be what was on it, but different artwork.

Are you guys planning on doing more shows outside of New Zealand, maybe coming to Australia?

A goal and shit for ourselves, was [we] want to see the world and I don’t see myself ever doing that without music. I gotta hold down a job and save money, and all that shit and go travelling, so I think this is just like the ticket out. We definitely wanna do shows everywhere—we want to go to Europe [and] we really wanna go to LA all in due time.

Do you guys have aspiring plans to do another project in the future?

Yes, we’re working on the album right now and the sound’s different again just like the first project to the second one. It will be quite different as well, but yeah definitely more projects and just ‘on to the next’ type thing.

Where do you guys see yourselves in the hip-hop world in the future?

Probably making music on a dessert island or something…as long as we’re still making music, it doesn’t really matter. I think we try and make music for, primarily for ourselves, we’re not trying to jump on other people’s tips. First and foremost we don’t wanna make something that I wouldn’t listen to myself…At least trying to sound like someone else as I said, take what you can from people you have to do that in order to better yourself, but I don’t think a lot of the time, especially in mainstream hip-hop, it’s continuously chasing fads and that doesn’t make sense. People get into it not because they love making music and creating shit like that they make it for what can come from it and that’s not right to me.

You contributed to the vocals and the instrumentals and all of that too right?
Yeah, me and Tom write the songs…and we try and produce as a group.

Pretty much from here, you have shows coming up in New Zealand and then you’re making the physical EP and then is there anything for the future of Girl Songs?

Yeah, we got a little tour… I think it’s just Sydney and Melbourne at the moment and that’s on the 11th and the 14th I think.

Are you guys going to tour around the states? Has it been receiving a lot of love in the states?

Yes, it’s definitely a possibility. We’d go if it was possible, but yeah I think it’s still early days it’s been like two weeks since it’s been out so

This is about making true music right?
yeah, basically.