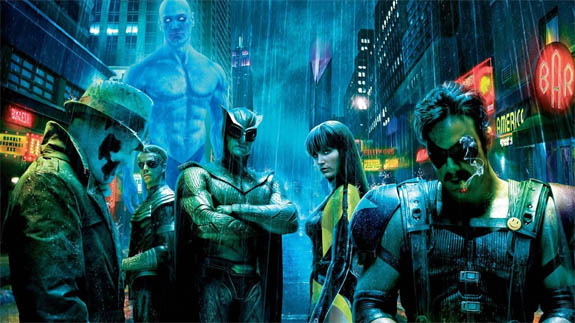 “You only get one chance to make a first impression.” It’s kind of truer for humans than it is for movies. Nonetheless, the way a film introduces itself has the potential to either keep you peeled for at least a few more minutes (assuming the rest of the film is a poop-smear on your screen), or a few more hours (assuming the rest of the film makes you want to smear chocolate sauce on your screen and lick it off because you develop a somewhat disturbing sexual obsession with it…). Monologues work, as do really intense action sequences…but one of the other driving forces of these introductions is the music that is used.

Of course a film can have an amazing original score, but when licensed music is used, that bone in your body which loves familiarity tingles, and brings you closer to the film, if only for a few fine minutes.

So here, out of my own leisure – or boredom, call it what you will – I have compiled a small list of a handful of films where scenes introducing the story and/or characters go hand-in-hand beautifully with their respective songs. If you think I’ve missed any on this list, well shit, pardon me for not stating every obvious choice such as The Good, The Bad & The Ugly, or Casino, or Boogie Nights, or Scarface, or Pulp Fiction, or The Breakfast Club, or Dirty Dancing, or Shaft, or any number of scenes from Goodfellas, or even making the jump to the ‘Time After Time’ scenes from Strictly Ballroom.

Since one of the most common locations in the Coen brothers’ comedy/thriller/noir is a bowling alley, a bowling montage seems natural. The low-brow satirical concept of bowling as an actual competitive sport is only emphasized by Bob Dylan’s lazy vocals, and the up-close shots of bowling balls and equally round bellies really make this more than just a guilty pleasure.

Also a very memorable scene was the introduction of the pederast Jesus Quintana (played by John Turturro). “What’s a pederast”, you ask? My answer is simple: “Shut the fuck up, Donny.”

Director Zack Snyder had his own Mt. Everest of expectations to reach when he agreed to take on the film based on arguably the greatest graphic novel of all time, Watchmen by Dave Gibbons and Alan Moore. But not only is the film a perfectly accurate recreation of the novel (save for a different and honestly better ending), the licensed music used to back this film up spanned several decades and genres. Apart from this being one of the best filmed, choreographed and directed fight scenes to be seen on a screen in a long while, Nat King Cole’s unforgettable Unforgettable (I had to) juxtaposes the mood and adds a nearly unfathomable grace and beauty to the brutality you are witnessing.

Followed right up by the very fitting The Times They Are A-Changin’ as the opening credits are a montage of alternative histories (and some slightly altered actual ones) from the 1940s up to and including the 1980s, it is a social commentary in which the song and the scene speak together rather than for themselves or each other.

Confession: I was a late bloomer for this film. 32 years this film had been out (22 of which I had to see but if you consider the fact that I couldn’t “lawfully” watch it until I was 18 then I only really had four years to watch it), and I had only seen this midway through 2011. You can hate, but it’s more appropriate that you envy, for I had the honour of seeing this on the big screen on the eve of its Blu Ray release, and I enjoyed it in all its high-definition glory on a big-ass screen in a cinema with a BEAST of a sound system. Because redemption.

So the rundown? Americans invade Vietnam in helicopters and massacre folk. Iconic, and the composition has since become a staple theme for scenes of invasion, whether it’s Dr. Manhattan ripping apart Vietcong atom by atom in Watchmen (I told you the film had great music) or Mr. Burns invading Springfield’s Evergreen Terrace in a tank, only to have it foiled – well, taped over – with ABBA’s Waterloo.

Since becoming a fan, one of the things that I have maintained about each and every David Lynch film (save for Dune and A Straight Story) is his uncanny ability to create a scene so beautiful it can bring you to tears, and within no time make it utterly frightening…which will also bring you to tears. It’s not even just that, it’s that the man can lull you into a dream-like state through the audiovisual experience of his films, and have you pace back and forth between dream and nightmare with no escape, even though it’s as simple as pressing the ‘OFF’ button.

I challenge you to endure through the three hours of madness that is Inland Empire (2006). But anyhow, this is arguably one of the most beautiful scenes ever depicted on film, and despite it being my subjective opinion, you’d be hard-pressed to find many who would disagree. And with good reason. After all, how often do you get to hear a Spanish rendition of Roy Orbison’s Crying (1961)? The film is just as cryptic the fifth time you watch it as it is on the first, so you hardly even need context to appreciate, but with scenes like this, you never feel like your time has been stolen regardless.

And then, there are these deceptively lighter, peppier albeit equally beautiful moments, which leave you wondering if you are still watching the same film. Needless to say, Lynch awakened in me a love for 1960s pop earlier than anticipated, and these back-to-back renditions of Sixteen Reasons and I’ve Told Every Little Star have more than something to do with that. No complaints.

The most surprising film of 2011 for me, and it is no coincidence that it had one of the most breathtaking intros I have ever seen on film. Men, no matter how many times your lady-friend has forced you to sit down and watch The Notebook with her and made you hate Ryan Gosling, this film single-handedly dissolves any disdain you may have for the man after seeing Nicholas Winding Refn’s masterful Drive.

Not only is it extremely well-filmed and told, the film itself is an homage to the best things of 80s film-making and music which transpired into our era.

Though none of the music from the film is actually from the 80s, the influence is there. And Kavinsky’s Nightcall is the prime example of how to top off a heart-stopping opening sequence transitioning into the opening credits.

Yeah yeah, many of you are like “WTF? What is this film? Why are there a bunch of rappers in it?” No, it is by no means a great film, and even calling it a good film is a little bit of a stretch, but it’s definitely more than okay. Hype Williams – yes, the famed rap music video director – made his first feature film, starring Nas, DMX, Method Man and TLC’s T-Boz. The film is nothing spectacular as it tries to make the step up from a ghetto drama to a crime thriller, but if there is but one reason and one reason alone to watch it, it is for this opening sequence, which ironically enough is pretty much a music video itself.

The film itself is one with a big booty butt of a social conscience and is told over the course of a single, boiling hot day in Brooklyn’s notorious Bedford-Stuyvesant neighbourhood as issues of racism, identity, police brutality, religion, employment, music, sports and fashion trends are explored among the multi-ethnic inhabitants. And the music itself is stellar; both the licensed songs (introduced by Samuel L. Jackson as radio DJ ‘Senor Love Daddy’) as well as the original score.

Minimal. Soulful. Funky. Superb. Classic Tarantino. Pam Grier is more like Pam Gaia, she is Mother Nature incarnate. This may not be my favourite Tarantino film, but it is without a doubt my favourite musical intro sequence of his. And by God he has many! Nothing more to say, other than Tarantino, Womack and Grier are geniuses.

Of course if they stuck with the following alternative, Jackie Brown may have been a different film indeed. A very, very different film.