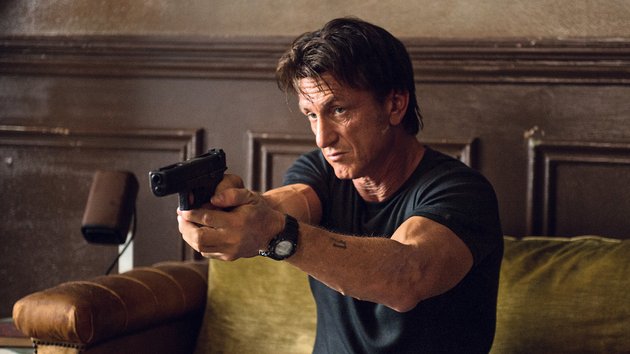 Karma has made an appearance to the lead character of new action flick, The Gunman. A sniper known as Terrier (Sean Penn) has, by order, assassinated the minister of mines in the Republic of Congo. Forced to retreat when civil unrest unexpectedly escalates, Terrier returns to the Republic of Congo seven years later to help the country rebuild in some way. It isn’t before long his presence there is not only discovered, but unwanted and sees the hunter, now become the hunted.

Despite being marketed as an action/crime film, The Gunman should be labeled more a mystery/comedy. It is a mystery as to what Sean Penn can see in this hopelessly silly and unabashedly bad flick he has not only starred in, but assisted in writing and producing too. And a comedy, for its propensity to unintentionally provoke laughter from its audience much more often than it can do anything else.

Early scenes in the Republic of Congo are so-so, then as we travel with Terrier to some very pretty European locations including London and Barcelona, it isn’t before long The Gunman is shooting itself in the foot and limping heavily toward a bloody poor finale.

The novel, which I have not read (you’ll read me writing this often!) is no doubt cleverer than the screenplay on offer and leads to the film firing more ammo off than it can load. This movie takes itself far too seriously and is easily 25 minutes too long. Seemingly still in character from his last Bond-outing, Javier Bardem’s odd performance portraying an already wacky character results in a case of wrong-movie, wrong-time. But he isn’t nearly as bad as this year’s Rasberry-favourite for me, Mark Rylance.

Best I can say for The Gunman is there are about 75 out of 115 minutes of moderate, throwaway entertainment to be had. Even so, if you want a ridiculously silly action flick that intends to give you a good time regardless of how that may be, or a guilty-pleasure mindless action/thriller that doesn’t fluff around and gets straight to the nitty-gritty, then Furious 7 and Run All Night, respectively and both still in cinemas, succeed in providing the viewer just what the Doc ordered over this rather lamentable effort from the director of Taken, who now seems to be a one-trick pony.

Previous Article Can I Kick It? | Reebok Instapump Fury OG 'Iron Man'
Next Article Van Hunt: What You Were Waiting For
[contact-form-7 id="4565" title="Contact Form"] ×