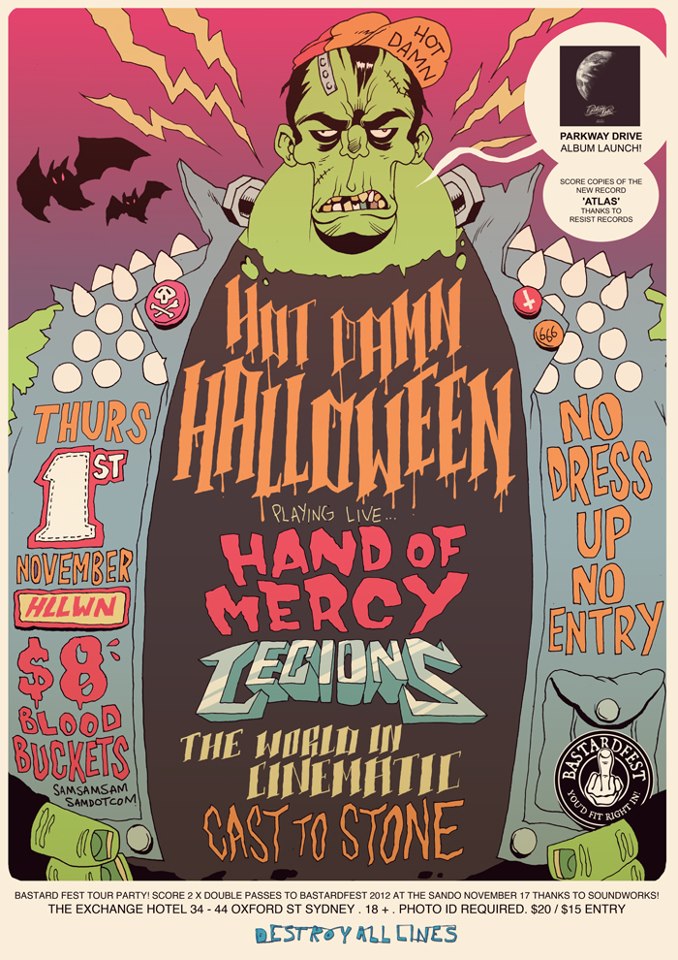 Click on the image above to visit the event page.
It was the first of November, It was a dark and stormy night and the party kids of Sydney were wandering up past Hyde Park after polishing off their last sip from the goon bag. They headed up Oxford St and came across the Halloween party to end all parties and well, to be honest the night is a bit of a blur from here on…November 1st is Hot Damn!’s Halloween Mega Party! We’re bringing out the cobwebs, dusting off the fake blood and prepping the terrible costumes for our biggest dress up party of the yea
r. That big green bastard on the poster will be at the door ensuring no dress-up no-entry and we have a few surprises in store too! (we call him Gunta FYI)Headlining this monster occasion are HAND OF MERCY. These guys shred harder than Freddy Krueger on MDMA and we’re fucking stoked to have them headlining. Their new album ‘Last Lights’ is out now and this will be their first club show since the release, let’s chuck a mosh!Supporting them are:
LEGIONS
THE WORLD IN CINEMATIC
CAST TO STONEUpstairs the Hot Damn DJ’s will play the best Punk / Party / Zombie jams all night to keep you dancing harder than Michael Jackson in the Thriller video until way past your bed time.

Bastardfest 2012 is on at The Sando on November 17th and we have a stack of copies to give away thanks to Soundworks.

Drinks are cheaper than the jokes on the latest Scary Movie with $5 BEER AND SPIRITS and for this night only, $8 BLOOD FUCKETS (2 shots, one bloody fucket, no questions, seriously, you don’t want to know).