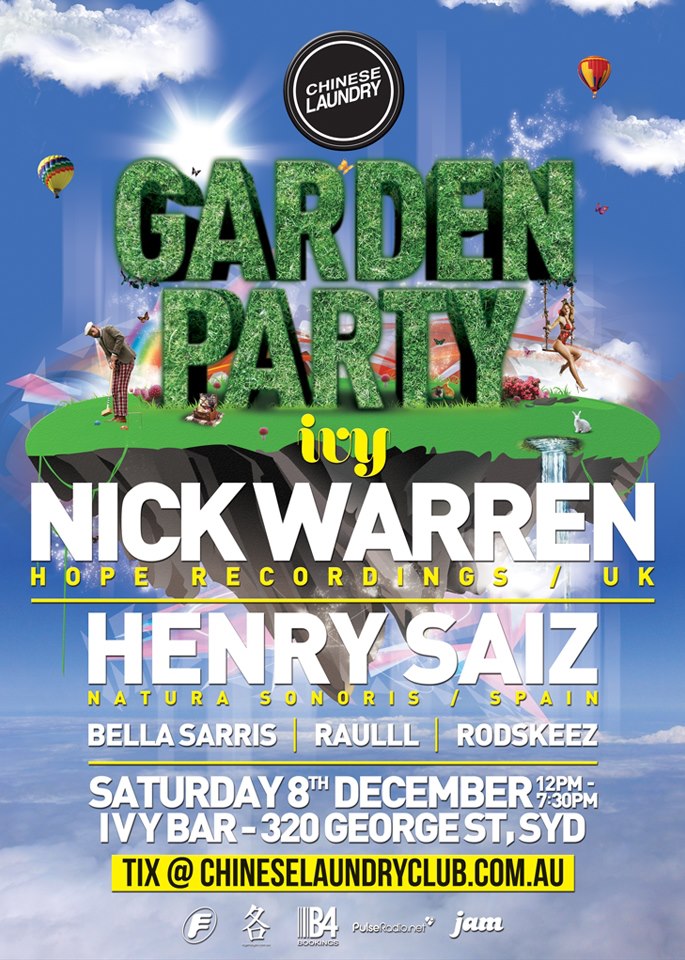 With Spring and the outdoor party season well and truly upon us, it’s about time for a Garden Party announcement, and after the year we’ve had at Laundry – may as well make it a big one!

ts that need no introduction to Sydney and Chinese Laundry audiences, both artists chose Chinese Laundry to launch their respective ‘Balance’ compilations in 2011, and Nick Warren headlined an unforgettable Garden Party at Laundry on NYE 2010/11.The Garden Party series have been named Sydney’s best outdoor parties, and this will be no exception – in standard Chinese Laundry Garden party style we feature 2 massive internationals, plus local guests & Laundry residents rounding out the line-up.This is going to be a magical day of cool tunes, cool vibes and cool drinks. As always ivy will run standard Chinese Laundry priced drinks, and Laundry dress code applies.

Hope you can join for this very special outdoor event!!

Links to check out

You can tell when Nick Warren’s on the decks. The music emanating from the DJ booth is that perfect club mix of driving percussion and soaring musicality, bursting out of the speakers, soaking everyone in melody, drenching them in sound. Warren’s impressive career has seen him release the very first “Back to Mine” album, a staggering eight albums for “Global Underground”, and one for “Renaissance” and “Cream”. He is also in control of A&R for record label Hope Recordings, as well as being a member of the highly acclaimed duo Way Out West. Starting as tour DJ with Massive Attack, moving onto a residency at super club Cream and playing at every self-respecting club on the planet, has led him to this natural position as one of the world’s most respected DJs.

In 2011, Nick released the highly acclaimed “Balance 018”, one of the highest selling in the series, receiving high praise from fans and media alike. Plus, the incredible single “Buenos Aires” became the 100th release on his beloved label, Hope Recordings in May. 2012 looks like another great year for Nick, with various solo releases planned and he is heading into the studio with Jody Wisternoff to work on the new Way Out West album.

Henry Saiz is the creator of a style that is a combination of his love for all things electronic with a deep passion for art. His music, as well as his work as a sound designer for film and TV has always been marked as forward thinking in approach and groundbreaking upon delivery. Henry’s sound refuses to fall into a singular category, he takes in influence on many different levels and incorporates this into his live and DJ sets by forging a perfect balance of Electronica, Disco, House and Techno. Henry’s first productions were released through the highly regarded Global Underground and Paradigma Musik imprints. These releases were instantly noticed by house giant John Digweed, which led to creating one of the biggest tracks of 2009, which was also named as Pete Tong’s Essential New Tune. Released on Bedrock, Henry’s remix of Guy J’s “Lamur” was regarded by critics and DJ’s alike as “the track of the year”. Following the success of this remix, yet another giant label; Renaissance commissioned the release of “Artificial Paradises EP” and “Madre Noche EP” in 2009 and “The Rider EP” in 2010.
His rising reputation has earned Henry the honour of being asked to produce Balance Music’s 019 compilation. Following on from the likes of Timo Maas, Joris Voorn, Will Saul and Agoria, Henrys addition to this world-renowned mix series has more than lived up to expectations and has set a new benchmark in depth and quality.