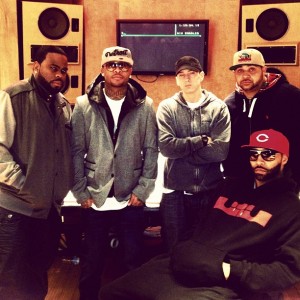 Are Diddy and Cassie now a couple? Have Chris Brown and Rihanna hooked up again?

Does music still matter? Well if you’re Joe Budden and Slaughterhouse apparently it does. As long as you overlook their shameful re-working of the hook from Corona’s Rhythm of the Night.

The Jersey devil himself has made it official that Slaughterhouse will be releasing a mixtape before their highly anticipated debut album on Shady Records. In fact Joe Budden took time out of his busy cereal-eating schedule (kind of) to preview three new songs from the tape.

The mixtape currently has no release date, while their new album, Welcome to: Our House, is due out August 28th.

Here’s hoping that Budden and his industry-weary cohorts get to tame the elusive beast that is the ‘Shady Records Debut Album’. At least it would make for a good beef, “where’s our album Marshall?”