Eloqour Releases ‘From the Oceans of Karana’ 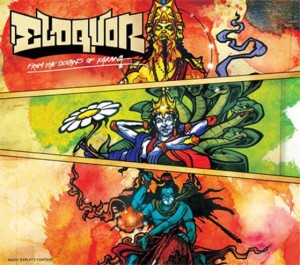 Following on from the release of his 2011 EP, Eloquor continues to explore his fascination with the human condition.  From the Oceans of Karana is a spiritual encounter, which explores both the fundamentals and intricacies of life.

The album is divided into three parts; Creation, Preservation, and Destruction. Each part is proceeded ceremoniously by a foreword from Ramesh, a Hindu mystic. The concept behind Eloquor’s themes is inspired by the three Hindu gods Brahma (the Creator), Vishnu (the Preserver), and Shiva (the Destroyer). Otherwise known as the Tridev.

Eloquor’s reverence for eastern philosophy and religion is strewn through his lyrics, his masterful story-telling transcended by a soundtrack of evocative 1970’s Bollywood samples, soulful jams and classic boom bap sounds.

Lead single, New Day, touches on Eloquor’s principles, both as a musician and as an optimist. Featuring the soulful vocals of Ginger Van Es, the track glides smoothly from the beginning to the outset, providing a peaceful vibe.

Following up, Electric Kids, digs deep into the artists empathy for underprivileged youth, hoping to uplift and empower the often neglected teens.

“I wrote this track to uplift kids that are feeling shit about their situation. The song is for the kids so they don’t feel alone. For the kids in residential care with parents who are unable to raise them for whatever reason it may be.” –Eloquor

Recorded especially for the track, Eloquor uses vocals performed by students at Caulfield Park Community School, where he teaches disadvantaged and at risk youth.

‘One’ extends the universal outlook of Eloquor’s existence, touching on the emcee’s astral side. From the sampled 70’s Bollywood records, the production of 76 compliments the MCs flow, with rhymes touching on topics of creationism.

From the Oceans of Karana is a generously personal look into the mind of a deep thinker. Eloquor graciously lends his words as a vehicle for introspection, in the hope they benefit his listeners.