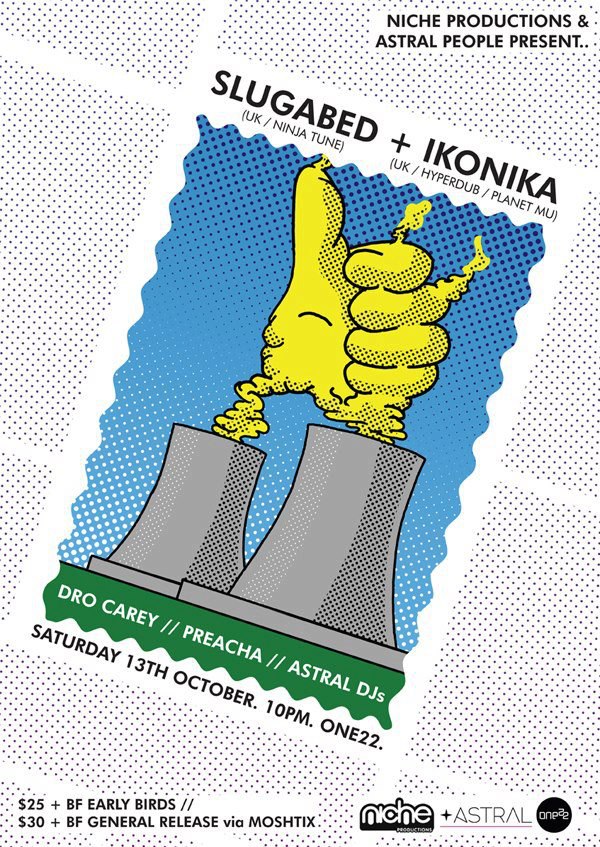 Astral People & Niche Productions are proud to present a joint tour from two of the most exciting and enigmatic names in the global music register, as SLUGABED (UK) & IKONIKA (UK) join Sydney’s Dro Carey for an all-night take on the futurist UK club sound.

Greg Feldwick aka SLUGABED is a substantial newcomer in the UK scene, making his global presence known with early releases on RAMP Recordings and the ever-viable Planet Mu. It was however an exceptionally well received remix of Roots Manuva’s Witness

the Fitness, that saw not only an album deal with the almighty Ninja Tune, but a worldwide appreciation for his vitriolic blend of all things electronic. Funny, clever, referential, sometimes moving and never anything but himself, Slugabed’s first ever Australian tour is an experience not to be missed.Ikonika has too proven herself as a rare face in a constantly evolving soundscape, with a musical profile as ambiguous as the highly personal stories behind it. Her style fuses all the DIY attitude of early-dubstep and Detroit techno, underscored with the beautifully melodic production of modern RnB and video game soundtracks. Releasing almost exclusively on the acclaimed Hyperdub & Planet Mu imprints, 2011 saw her own label, Hum n’ Buzz, founded alongside Japanese artist Optimum. A platform for the pair to self-release their own brand of electronic sounds, the label recently veered off to unleash Sydney’s very own Dro Carey on a global register. Ikonika’s recent EP ‘I Make Lists’ is out now.

Joining this double-international headliner is Sydney’s very own Dro Carey. Dro’s hyper-divisive blend of obscure techno, dubstep and hip-hop has garnered consistent global attention, with his exceptional mixes acclaimed from the likes of Fact Magazine, XLR8R and the entire RinseFM community. Catch Dro Carey in his skewed element amongst one of the most exceptionally crafted international lineups Sydney will see this year.