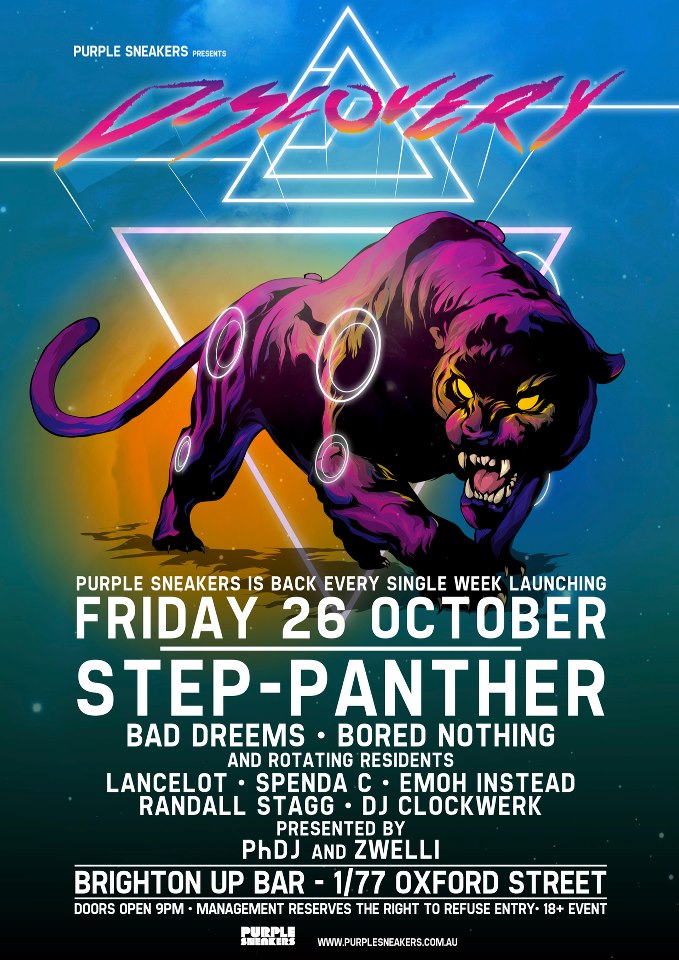 Click on the image above to visit the event page.
We’re pretty proud of what we’ve achieved here at PURPLE SNEAKERS in the world of live/electronic music and partying. Our clubs in Melbourne (CANT SAY) and Canberra (NITE SOCIETY) have kicked a serious amount of goals since they opened their doors; hosting the world’s biggest party acts as well some of Australia’s most up and coming artists, all the while keeping a killer atmosphere each week filled with friendly faces and ridiculous antics.Although this has been unbelievably rewarding (in every sense of
the word) something has been missing over the last year – something that’s close to our hearts. We have been missing our spiritual home of Sydney and we feel it’s just not right for us to leave that beautiful city without one of our infamous weekly parties. So it’s time for us to announce our newest member of the PURPLE SNEAKERS family, DISCOVERY. It will take place at the 100 capacity Brighton Up Bar, on Oxford Street, every Friday, launching on October 26th.Focusing on new music DISCOVERY will come to be THE place where you will see hot new bands/DJs/producers first. The launch event will feature garage punk bros Step-Panther launching their new single ‘Maybe Later’ live, supported by two Unearthed feature artists: Bad Dreems from Adelaide, and Melbourne dude Bored Nothing. And just in case you don’t know who the fuck Step-Panther are NME named them one of the 100 best new bands of 2012.I mean just saying, this is not the sort of line up you’d expect in a 100 capacity venue. And not just that but add to it the massive rotating roster of weekly residents… We’re talking upcoming DJ/producers like indie disco guy Lancelot, Moomba/Trap aficionado Spenda C, genre-hopping young gun [and one half of PURPLE SNEAKERS DJs Randall Stagg, Chris ‘Emoh’ Emerson of What So Not fame, and current NSW DMC champion turntablist DJ Clockwerk. As well as being hosted by notorious party dudes PhDJ and Zwelli – all in a joint not big enough to swing a cat in – and you have yourself the makings of a pretty epic weekly party!!!!

As the brainchild of our main man, Martin Novosel (aka PhDJ), PURPLE SNEAKERS has come a hell of a long way from its humble beginnings at the Abercrombie Hotel. As a team we have grown up and graduated, moving on to become a buzzing nationwide community, clad with a brand new singles label, a boisterous blog, touring DJs, and parties across the country.

Now in 2012, not only have our parties hosted internationals like Star Slinger, Kele, Kisses, Gigamesh and Odd Future (DJ set) on their first tours. We also provided the cream of the current generation of hot local acts with some of their early shows – we’re talking acts like The Rubens, Kimbra, Flume, Alpine, DZ Deathrays, Jezabels, Bleeding Knees Club (all waaaaay before they were household names). Just sayin…