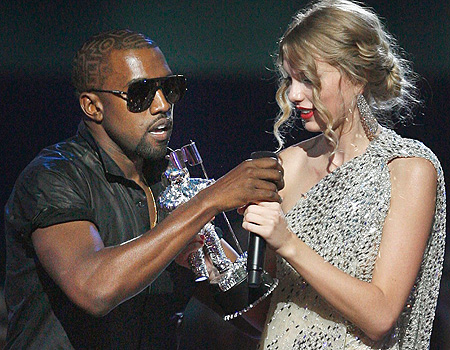 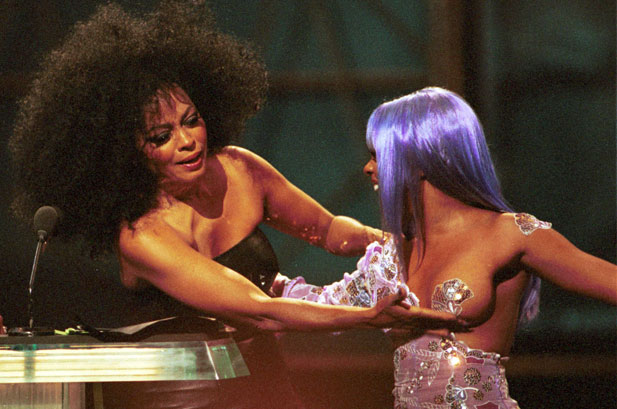 The MTV Video Music Awards have come and gone again and as we lament over its passing, Billboard has decided to showcase the 10 craziest moments in the award show’s history. Kanye may not steal Taylor’s thunder again this year, and Madonna (probably) won’t kiss anyone, but we can always hope for unscripted moments like these. 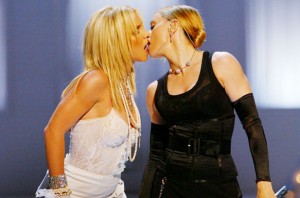 Britney and Madonna get it on

The only good thing about Kanye’s outburst at the 2009 VMAs is the amusing Internet meme it inspired for a solid three months. Now he doesn’t need to pull stunts like that to be heard — that’s what his Twitter account is for.

Beyonce didn’t utter a single word about her pregnancy during the show, but she reportedly announced it to MTV and later the AP confirmed the news with her rep. By the time the actual awards show began, Jay-Z and Bey’s baby was already the story of the night.

Lil Kim’s outrageous boob-baring outfit was already a hot topic by the time she joined Mary J. Blige on-stage to introduce Diana Ross. But when the Supreme lady gave Lil’ Kim a lil’ jiggle on the podium, the moment became the stuff of VMA legend.

Lady Gaga is the queen of crazy stage outfits, so the fact that she wore a lace bunny mask at the start of her “Paparazzi” performance at the2009 VMAs is par for the course. But she fully jumps down the rabbit hole when she her abdomen starts bleeding three minutes into the song.

2007 was not a good year for the Britney Spears, and this VMA performance is the tragic proof. After wowing the VMA stage with show-stopping appearances in 1999, 2000 and 2001, an un-toned and noticably unprepared Brit awkwardly stumbles through her routine and lip syncs half-heartedly, looking almost like a zombie.

About a minute into the clip, you see Lisa Marie Presley squirm and clutch her stomach, probably because she knew what was coming. The on-stage kiss between her and the King of Pop seemed more like a dare than a real-life romance. In fact, the Britney/Madonna kiss might be more believable.

2. Tim Commerford Rages Against The Scaffolding, 2000

Rage Against the Machine bassist Tim Commerford was so distressed that his band lost the Best Rock Video award, he climbed on top of the scaffolding just behind the podium and began taunting Limp Bizkit during Fred Durst’s acceptance speech. Commerford did not “stage dive,” as Durst suggested, but both he and his bodyguard were removed from the stage and arrested after the incident. It’s widely believed that Commerford’s attention-seeking antic was one of the final straws that led to RATM’s breakup later that year.

1. Nirvana Bassist Hurts Himself On Stage, 1992